Blessed Margaret Pole, Countess of Salisbury, born Margaret of York & Clarence (14 August 1473 – 27 May 1541), was an English peeress. She was the daughter of George, Duke of Clarence, who was the brother of King Edward IV and King Richard III. She was one of two women in sixteenth-century England to be a peeress in her own right with no titled husband. One of the few surviving members of the Plantagenet dynasty after the Wars of the Roses, she was executed in 1541 at the command of King Henry VIII, who was the son of her cousin Elizabeth of York. Pope Leo XIII beatified her as a martyr for the Catholic Church on 29 December 1886. 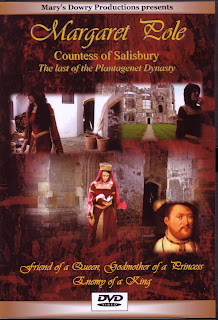 Margaret was a middle-aged noblewoman charged to act as governess and guardian to Princess Mary, daughter of King Henry VIII and Katherine of Aragon, when the princess was awarded her own household in the Welsh marches. Lady Salisbury later earned the King's enmity as the mother of Reginald Pole, who declined his offer of an appointment to a senior position in the Church of England but reluctantly accepted the rank of cardinal from the Pope. With Cardinal Pole beyond his reach Henry took vengeance against his family by having Lady Salisbury, another of her sons and her young grandson executed. Historically this was widely seen as an atrocious act by Henry against an elderly woman who was innocent of any crime.
In 2007 Mary’s Dowry productions created a new form of film media to present the lives of the saints. Mary’s Dowry Productions recreates stunning silent visuals, informative, devotional narration, and original contemplative music that touches your spirit to draw you into a spiritual encounter with the saint. Watch with your spiritual eye, listen with your spiritual ear. Our films seek to offer a window into the lives of our saints. Using your spiritual senses we invite you to shut out the world, sit prayerfully and peacefully and go on a journey of faith, history and prayer with this inspiring Tudor woman.
Available worldwide on DVD, all region formats:
www.marysdowryproductions.org
Posted by MarysDowryProductions at 21:41

I want to see more!