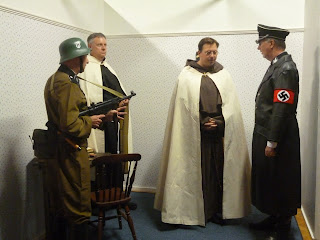 Behind the scenes photograph of a scene filmed on Saturday October 10th 2015 for Blessed Titus Brandsma, a Dutch priest who was martyred in the Dachau Concentration Camp in 1942.
This scene shows Blessed Titus with his superior as he is arrested.
The set was built to give a simple backdrop for several scenes throughout the day and was constructed in the barn attached to English Martyrs Catholic Church in Goring-by-Sea, home of Mary's Dowry Productions and the Sistine Chapel Reproduction.
Our film about Blessed Titus Brandsma is due for release within the next few months.

In 2007 Mary’s Dowry productions created a new form of film media to present the lives of the saints. Mary’s Dowry Productions recreates stunning silent visuals, informative, devotional narration, and original contemplative music that touches your spirit to draw you into a spiritual encounter with the saint. Watch with your spiritual eye, listen with your spiritual ear. Our films seek to offer a window into the lives of our saints. Using your spiritual senses we invite you to shut out the world, sit prayerfully and peacefully and go on a journey of faith, history and prayer with our inspiring Saints.
For a full listing of films:
www.marysdowryproductions.org