The Shining Pearl of York, a film about Saint Margaret Clitherow, English Martyr 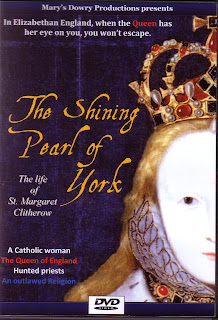 The Shining Pearl of York

Not only did Saint Margaret Clitherow live and breathe the Catholic Faith, devotions and piety in her daily life, but she determinedly organised and kept secret rooms, holes and safe locations, even in her own home, for hunted Catholic missionary priests. She hid sacred vessels used in the celebration of the illegal Holy Sacrifice of the Mass, educated her beloved children and the children of her neighbours in the Catechism of the Catholic Church, lit devotional candles, prayed the rosary and other illegal activities, which saw her arrested numerous times.

Learn about the inspiring life of this great Elizabethan Catholic wife, mother and Saint in a film that has been internationally praised for not only presenting information, details and facts but a prayerful and spiritual film experience. As seen on EWTN.