Saint Edmund Campion - A hero returns. As seen on EWTN.

It has been 10 years since the launch and release of our DVD about Saint Edmund Campion. This film was broadcast on EWTN for over five years and remains a popular and inspiring way to journey with this great English, Jesuit missionary priest and martyr, who gave his life at the Triple Tyburn Gallows in 1581. 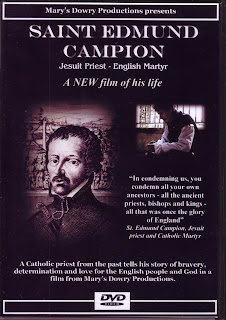 The life, mission and death of English Jesuit priest and Martyr Saint Edmund Campion are remembered in this film from Mary’s Dowry Productions. Follow the journey of a man with a mission to minister to the persecuted Catholics of Elizabethan England. From the universities of Oxford, to the Court of Queen Elizabeth I, through Ireland, France and Rome and back across the channel to illegally re-enter England as a Jesuit Priest, Saint Edmund Campion is pursued by spies and priest-hunters, writes his famous ‘Brag’ and ‘Ten Reasons’, is captured, tortured, imprisoned in the infamous Tower of London, and is subjected to trials and debates.

Determined to remain loyal to his Catholic Faith, Saint Edmund Campion is eventually sentenced to a traitor’s death and gives his life on Tyburn Gallows in 1581. He died aged 41, a Catholic priest and a faithful Englishman.

This film presents Saint Edmund Campion’s journey using dramatic visuals and narration told from his own perspective. A challenging and important story for Catholics today.

Our unique film production style has been praised worldwide for not only presenting facts and biographical information but an authentically Catholic and prayerful film experience. Mary’s Dowry Productions was established in 2007 - a Catholic Film Production Apostolate based in the United Kingdom. Many of our films have been broadcast on EWTN, BBC and SKY.

Length and Format: The film runs for 1 hour and 5 minutes and is available on Region Free DVD worldwide here: