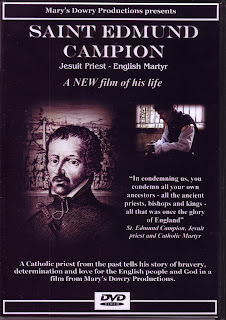 Saint Edmund Campion, S.J., (24 January 1540 – 1 December 1581) was an English Roman Catholic Jesuit priest and martyr. While conducting an underground ministry in the now officially Anglican England, Campion was arrested by priest hunters. Convicted of high treason on account of his being a priest in England, he was hanged, drawn and quartered at Tyburn. Campion was beatified by Pope Leo XIII in 1886 and canonised in 1970 by Pope Paul VI as one of the Forty Martyrs of England and Wales. His feast is celebrated on 1 December.

“In condemning us, you condemn all your own ancestors - all the ancient priests, bishops and kings - all that was once the glory of England”.

In 2007 Mary’s Dowry productions created a new form of film media to present the lives of the saints. Mary’s Dowry Productions recreates stunning silent visuals, informative, devotional narration, and original contemplative music that touches your spirit to draw you into a spiritual encounter with the saint. Watch with your spiritual eye, listen with your spiritual ear. Our films seek to offer a window into the lives of our saints. Using your spiritual senses we invite you to shut out the world, sit prayerfully and peacefully and go on a journey of faith, history and prayer with this inspiring Elizabethan Saint.
"Saint Edmund Campion" is available worldwide from Mary's Dowry Productions online shop.
Visit http://www.marysdowryproductions.org/
Posted by MarysDowryProductions at 15:39