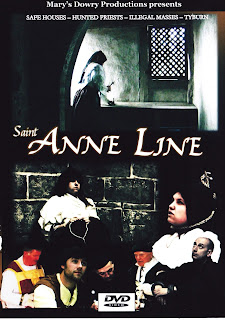 Saint Anne Line, Reformation Martyr, Catholic recusant, hanged at Tyburn:
Fr. Thompson was a Catholic priest imprisoned and executed at Tyburn. He had been arrested with St. Anne Line's brother and husband and was killed by law for being a Catholic priest. He refused to renounce the Catholic Faith even though he knew that his sentence was to be hung, drawn and quartered on the Triple Gallows at Tyburn.

﻿﻿ In 2007 Mary’s Dowry productions created a new form of film media to present the lives of the saints. Mary’s Dowry Productions recreates stunning silent visuals, informative, devotional narration, and original contemplative music that touches your spirit to draw you into a spiritual encounter with the saint. Watch with your spiritual eye, listen with your spiritual ear. Our films seek to offer a window into the lives of our saints. Using your spiritual senses we invite you to shut out the world, sit prayerfully and peacefully and go on a journey of faith, history and prayer with this inspiring Elizabethan Saint.
A film about English Martyr St. Anne Line is available on DVD worldwide through Mary's Dowry Productions offers the viewer a window into the life of Saint Anne Line and those who helped defend the Faith in Elizabethan England.
www.marysdowryproductions.org/shop/