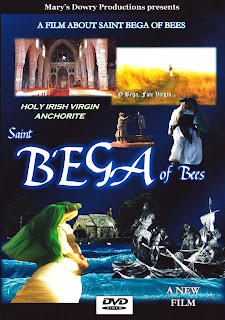 
St. Bega of Bees
St. Bega was an Irish princess who fled her homeland in the night to escape a planned marriage.  As she stood upon the seashore St. Bega implored of God a means to cross the Irish Sea to England. God heard her prayer and she cut a section of turf from the ground, placed it upon the sea and miraculously crossed to Cumbria where she lived as a hermit. Fearing the attack of pirates St. Bega made her way to the court of King Oswald of Northumbria and received the veil from St. Aidan of Lindisfarne. Miracles occurred after her death and she has been remembered recently in secular novels, plays and paintings. Includes a prayer found recently in a 15th century book of hours to St. Bega.
What you will hear:
The life of St. Bega and other fascinating historical facts in a simple yet informative narrative for the whole length of the film. Original contemplative music to accompany the narrative.
What you will see:
A selection of paintings, historical art, sacred imagery, relevant photographs; St. Bega and footage of English countryside.
Length:
The film runs for 27 minutes.
‘St. Bega of Bees’ is available on Region Free DVD worldwide.
AVAILABLE ON DVD WORLDWIDE FROM
www.marysdowryproductions.org
Posted by MarysDowryProductions at 20:28