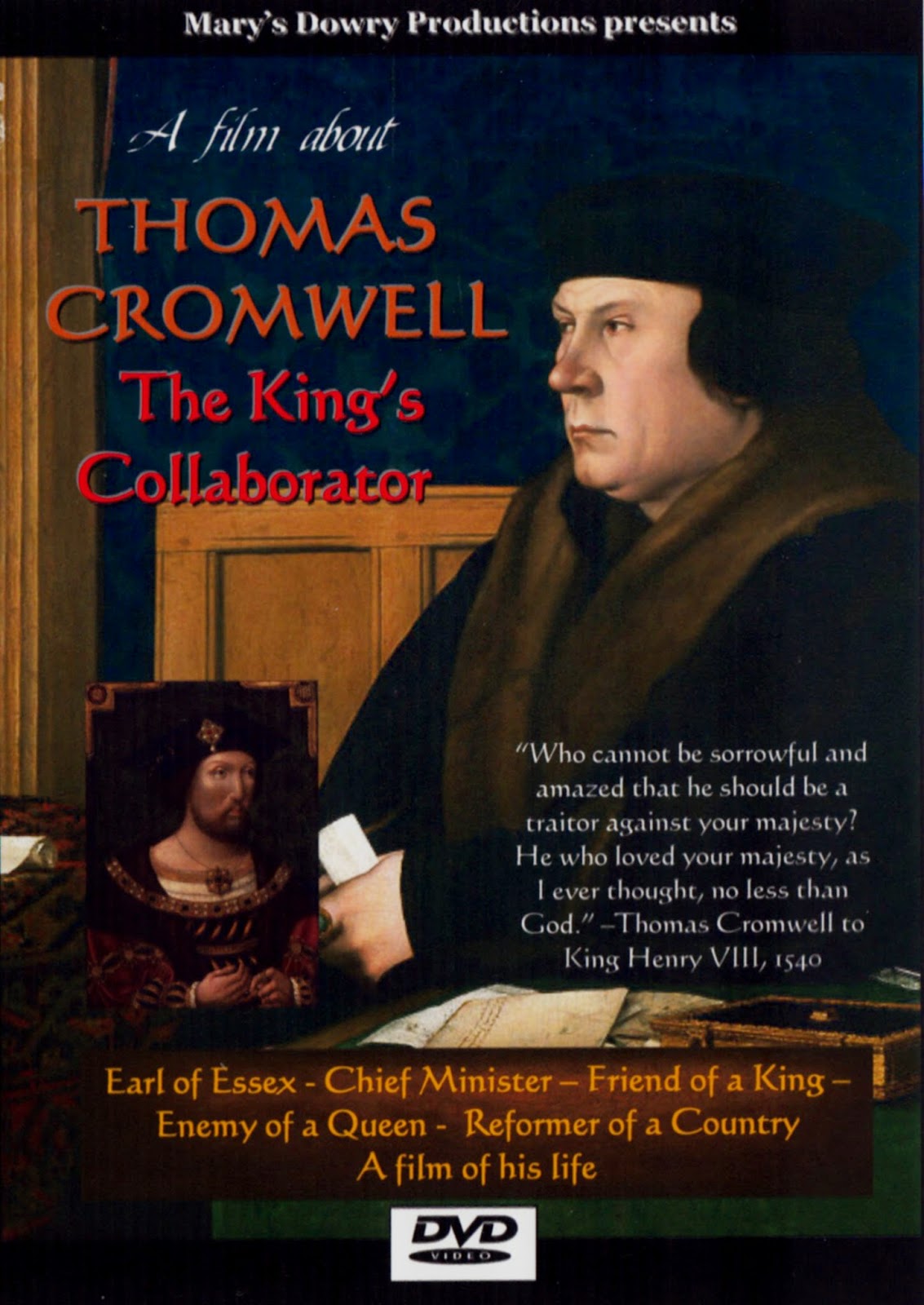 Thomas Cromwell: The King’s Collaborator
In 2012 Mary's Dowry Productions filmed key moments from the lives of Saint Thomas More and Saint John Fisher, two Catholic Saints from Tudor England. Many of these scenes included events that took place with Thomas Cromwell. Due to request, Mary's Dowry Productions produced a DVD that looks at Thomas Cromwell from a Catholic perspective, using the silent and contemplative scenes filmed for Saint Thomas More and Saint John Fisher.

The life of Thomas Cromwell is presented in a reflective manner. With Mary's Dowry Productions' style of film making we have created a new form of media. We offer a way to prayerfully and spiritually contemplate the lives of the Saints through film. While Thomas Cromwell is not a Saint or Catholic figure, his actions in history affected many of our Catholic Saints with whom he interacted, therefore this film about his life and work in a pivotal time in the history of once Catholic England is worth pondering. This is a film for Catholics.

While this film is produced for Catholics, it is filled with historical information, facts and details from the documented life of Thomas Cromwell. People unused to watching film with their spiritual senses may perhaps find it intriguing.

In 2007 Mary’s Dowry productions created a new form of film media to present the lives of the saints. Mary’s Dowry Productions recreates stunning silent visuals, informative, devotional narration, and original contemplative music that touches your spirit to draw you into a spiritual encounter with the saint. Watch with your spiritual eye, listen with your spiritual ear. Our films seek to offer a window into the lives of our saints. Using your spiritual senses we invite you to shut out the world, sit prayerfully and peacefully and go on a journey of faith, history and prayer with our inspiring Saints.


Tudor statesman, politician and reformer Thomas Cromwell remains known in history as one of the most powerful figures during the turbulent times of early 16th century England.  In this Catholic film of his life the Earl of Essex is presented as he was; friend of a king, enemy of a queen and reformer of a country, ambitious, determined and ruthless yet devoted in his aim to serve King Henry VIII with dedication, no matter what was commanded and with his own agenda in mind.  Looking in simple detail at his humble beginnings and his rise to power we follow Thomas Cromwell through his early years as Cardinal Wolsey’s secretary, a post that could have tarnished his career yet showed how ambitious this man from Putney truly was as he climbed the ladder of politics; we look at Cromwell’s part in King Henry VIII’s usurpation of the Church in England and his eventual position as King Henry VIII’s chief minister where he reshaped a nation, was finally condemned by the King as a traitor and executed at Tower Hill.  A presentation of paintings, maps, documents and costumed visuals make this a creative way to learn about the notorious Thomas Cromwell.

Thomas Cromwell, 1st Earl of Essex, KG (c. 1485 – 28 July 1540), was an English lawyer and statesman who served as chief minister to King Henry VIII of England from 1532 to 1540.
Cromwell was one of the strongest and most powerful advocates of Reformation especially using Religion for matters of State. He helped to engineer an annulment of the king's marriage to Queen Catherine of Aragon to allow Henry to marry his mistress Anne Boleyn when the Catholic Church deliberated that the King's marriage to Queen Catherine was lawful and vaild. After failing in 1534 to obtain the Pope's approval of the request for annulment, the English Parliament endorsed the King's claim to be head of the breakaway Church of England, thus giving Henry the authority to annul his own marriage. Cromwell subsequently plotted an evangelical, reformist course for the embryonic Church of England from the unique posts of vicegerent in spirituals and vicar-general.
During his rise to power, Cromwell made many enemies, including his former ally Anne Boleyn; he played a prominent role in her downfall. He later fell from power after arranging the King's marriage to a German princess, Anne of Cleves. Cromwell hoped that the marriage would breathe fresh life into the Re-formation of England, but because Henry found his new bride unattractive, it turned into a disaster for Cromwell and ended in an annulment six months later. Cromwell was arraigned under a bill of attainder and executed for treason and heresy on Tower Hill on 28 July 1540. The King later expressed regret at the loss of his chief minister.


Until the 1950s, historians had downplayed Cromwell's role, calling him a doctrinaire hack who was little more than the agent of the despotic King Henry VIII. Geoffrey Elton in The Tudor Revolution (1953), however, featured him as the central figure in the Tudor revolution in government. Elton portrayed Cromwell as the presiding genius, much more so than the King, handling the break with Rome, and the laws and administrative procedures that made the English Reformation so important. Elton says that he was responsible for translating Royal supremacy into Parliamentary terms, creating powerful new organs of government to take charge of Church lands and largely removing the medieval features of central government. Subsequent historians have agreed with Cromwell's importance, although downplaying the "revolution" that Elton claimed.
Leithead (2004) says of Cromwell:


Against significant opposition he secured acceptance of the king's new powers, created a more united and more easily governable kingdom, and provided the crown, at least temporarily, with a very significant landed endowment.