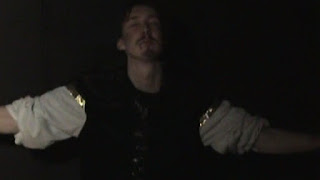 Screenshot © 2008 Mary's Dowry Productions
'Saint Edmund Campion - Jesuit Martyr'
﻿
ON the scaffold, Saint John Almond emptied his pockets of money and other things, which he threw among the crowd, except for a gold piece which he gave to the hangman, "not to spare him, but to treat him as he should". He had come hither, Saint John Almond said, to shed his blood for our Saviour's sake, Who had shed His Blood for his sins. In which respect he wished that every drop that he would shed might be a thousand; that he might have St Lawrence's gridiron to be broiled on, St Peter's cross to be hanged on, St Stephen's stones to be stoned with, to be ripped, ripped, ripped and ripped again! Then he kneeled down, and often repeating "Into Thy hands O Lord I commend my spirit", he waited till the hangman was ready without any sign of fear. 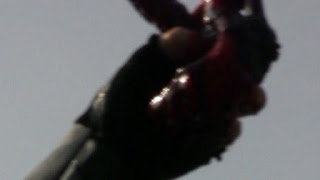 The hangman and the Martyr's heart
© 2010 St. Edmund Gennings DVD
﻿Ever smiling, Saint John Almond protested that he died CHASTE, not through his own ability or worthiness but by Christ's special GRACE - this for the benefit of a doctor of divinity who was present and had declared the thing impossible. At last the cart was drawn away, and with the words "Jesu, Jesus," Saint John Almond's soul went to Him for Whom he shed his blood, at Tyburn on 5th December 1612.
"Jesus also, that He might sanctify the people by His own Blood, suffered without the gate."
- Heb. 13, 12.
Reading from
The Mementoes of the Martyrs and Confessors of England and Wales
5th December
Our original films on the lives of the English Martyrs are available on DVD from our online shops:
www.marysdowryproductions.co.uk
and
www.marysdowryproductions.org
Posted by MarysDowryProductions at 18:47