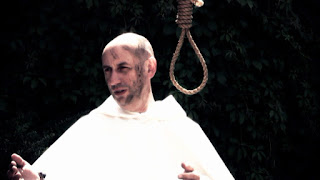 Screenshot of St. John Houghton from our DVD 'Saint John Houghton'
© 2015 Mary's Dowry Productions
Also Martyred at Tyburn
ABBOT BECHE was a friend of Saint John Fisher and Saint Thomas More and in repute as a devoted monk; but like his brethren of Glastonbury and Reading he took the oath of supremacy on it being tendered to him in 1534.
When called upon to surrender the abbey he refused, denied the king's right to take it, and asserted his loyalty to the Holy See: for this he was committed to the Tower. Later he endeavoured to explain away what he had said, asserted the king's supremacy against the pope's "usurped authority," and made a piteous appeal for mercy. But however lamentable this defection, he atoned for it by shedding his blood in the event. He was sent down to Colchester and tried there by a special commission, and he appears to have acknowledged the charges made against him.
He was hanged, drawn and quartered at Colchester on 1st December 1539. 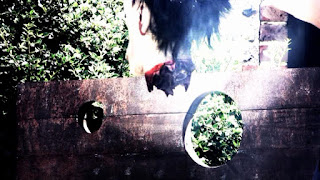 ©2015 Mary's Dowry Productions
Screenshot from 'Saint Robert Southwell' DVD
On his pectoral cross, still preserved, is inscribed:
"May the Passion of our Lord Jesus Christ bring us out of sorrow and sadness. This sign of the Cross shall be in the heavens when our Lord shall come to judgement. Behold, O man, the Redeemer suffered for thee. He that will come after Me, let him take up his cross and follow Me."
Blessed John Beche was the last Abbot of Colchester Abbey.
For films about the Martyrs of Tyburn and other Catholic Saints:
www.marysdowryproductions.co.uk
and
www.marysdowryproductions.org
﻿
Posted by MarysDowryProductions at 14:34