3rd May 1606 - an English Martyr - The execution of Father Henry Garnet, Jesuit

THE EXECUTION OF FATHER HENRY GARNET
3rd May 1606 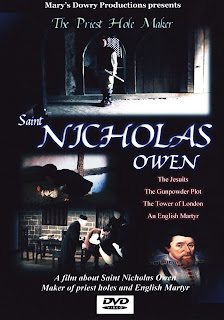 On this day in England in 1606, Father Henry Garnet was executed at Tyburn, London.
For some centuries, a second feast, the Invention of the Cross, was celebrated on May 3 in the Roman and Gallican churches, following a tradition that marked that date as the day on which Saint Helena discovered the True Cross. In Jerusalem, however, the finding of the Cross was celebrated from the beginning on September 14.  Pope Saint John XXIII removed this duplication in 1960, so that the General Roman Calendar now celebrates the Holy Cross only on September 14.
At the time of Father Henry Garnet's execution, he highlighted the date of the Feast of the Holy Cross and reaffirmed his innocence of the crimes of which he was charged.
Father Henry Garnet was an important figure in England during the time of the Martyrs, as the head of the Jesuits in England and a deeply holy priest.
We have included Father Henry Garnet in several of our film biographies of the English Martyrs, especially in our film SAINT NICHOLAS OWEN: THE PRIEST HOLE MAKER.
Here is an account of this day in 1606:
3rd May 1606 - Father Henry Garnet's execution
After about three months spent in the Tower, on Saturday 3 May 1606 Garnet was strapped to a wooden hurdle and taken by three horses to the churchyard of St Paul's. He wore a black cloak over his clothes and hat, and spent much of the journey with his hands together and eyes closed. Present in the churchyard were the Sheriff of London, Sir Henry Montague, George Abbot and John Overal. When asked if he had knowledge of any further treasons, Garnet replied that he had nothing to say. He rejected any entreatments to abandon his faith for Protestantism, and said that he had committed no offence against the king. The only thing he thought he might be condemned for was for abiding by the terms of the confessional, and if by that action he had offended the king or state, he asked for forgiveness. The recorder announced that this was an admission of guilt, but Garnet reiterated his not guilty plea and continued to argue the point.
3rd May, a second FEAST OF THE CROSS - SAINT HELEN 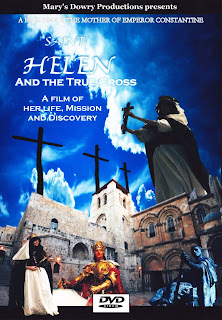 Garnet highlighted the date of his execution, 3 May, the Feast of the Cross, and reaffirmed his innocence. He defended Anne Vaux against claims that their relationship had been inappropriate. He then prayed at the base of the ladder, disrobed down to his long, sewn-up shirt, "that the wind might not blow it up", and mounted the ladder. He ignored a Protestant minister who came forward, replying to an objectionable member of the audience that he "ever meant to die a true but perfect Catholic". Bishop Overal protested that "we are all Catholics", although Garnet disagreed with this. He once again said his prayers, and was then thrown off the ladder. Before the executioner could cut him down alive, many in the crowd pulled on his legs, and as a result, Garnet did not suffer the remainder of his grim sentence.
There was no applause when the executioner held Garnet's heart aloft and said the traditional words, "Behold the heart of a traitor". His head was set on a pole on London Bridge, but crowds of onlookers fascinated by its pallid appearance eventually forced the government to turn the head upwards, so its face was no longer visible.
A bloodstained straw husk saved from the scene of the execution and said to bear Garnet's image became an object of curiosity. It was smuggled out of the country into the possession of the Society of Jesus, before being lost during the French Revolution (from Wikipedia)
Henry Garnet features in several of our films.
Visit us online for a full listing of films including
Saint Nicholas Owen and Saint Helen:
www.marysdowryproductions.org ﻿
Posted by MarysDowryProductions at 14:54