Why venerate the martyrs? "Our forefathers in the faith are indeed exceedingly honourable" - The Martyrs of England and Wales

The Faith of our Fathers in England and Wales
4th May 2017
The Martyrs
Our film production apostolate, Mary's Dowry Productions, was founded in 2007 because of an English Martyr. Saint Philip Howard, the Earl of Arundel.
Since then, we have managed to present the accounts of several English Martyrs in film biographies as a way of making their heroic witnesses, missions and love for the Catholic Faith in England, more well known. Many of these have been broadcast on EWTN, thus reaching people all over the globe. We have had many letters and emails from people, especially in the USA, who have been amazed to learn the history of the English Martyrs, and the history of the Catholic Faith in England especially during penal times.
As a daily remembrance of our forefathers in the faith, we recall the historical records of their lives and times as well as their own writings.
The claims of the martyrs on our devotion need hardly be expressed. If the apostle of every country is specially venerated as the means by which the faith was first received, what honour is due to this goodly company of our own race and speech which at so great a cost preserved the faith for us?
Its members are our patrons, then, by the double tie of nature and grace.
"Look," says the Prophet, "to the rock whence you are hewn, to the hole of the pit whence you were dug out." And our forefathers in the faith are indeed "exceedingly honourable." Fisher, the saintly cardinal; More, the illustrious chancellor; Campion, the "golden-mouthed"; Southwell, the priest poet; Margaret Pole, the last of the Plantagenets; Margaret Clitherow, in the "winepress alone", Ralph Milner, the sturdy yeoman; Philip Howard, the victim of Herodias; Swithun Wells, a "hunter before the Lord"; Horner the tailor, with his vestments of salvation; Mason, the serving-man; Plunketh, last in time, not least in dignity or holiness. All these, high or humble, with the sons of SS. Augustine, Benedict, Bridget, Bruno, Francis, Ignatius, and the crowd of secular priests, bear the same palm and shine with the same aureole, for they confessed una voce the same faith and sealed it with their blood, and for this land of ours.
(From the Preface of the Mementoes of the Martyrs and Confessors of England and Wales by Henry Sebastian Bowden)
Some of our films about the English Martyrs are available to watch on Youtube, thus reaching a different audience as well as being shown to classes.
All of our films are available on DVD worldwide in all region formats from:
www.marysdowryproductions.org 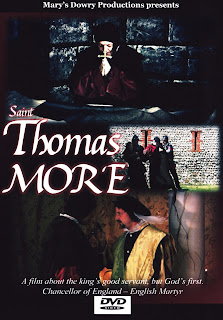