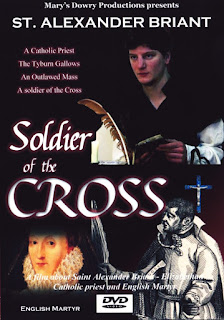 When Father Alexander Briant was arrested, his thoughts were immediately drawn to the Cross. His had been a mission where the Cross had always been present. He had had to leave England to study for the priesthood and return as a hunted man. His journeys would have taken place in all sorts of weather, oftentimes cold, wet, uncomfortable and he would have rested or slept often without a roof over his head. He could not wear his cassock in public if he wished to maintain his missionary work for he would have been arrested and the people would have been deprived of the outlawed Holy Sacrifice of the Mass. His heart would have been saddened to see the destruction of England's Catholic heritage about him and the majority of Elizabethans following the State Church. There were times of joy when he reconciled Protestants to the True Faith, heard Confessions, administered the outlawed Sacraments, but he knew he would one day be captured and so, like Our Lord, he kept the Cross, his final destination, always before his eyes. 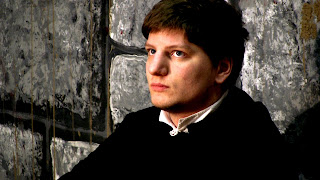 Once in his prison cell, Saint Alexander carved a small Cross out of wood which he held with him at his trial. Before that, he was subjected to torture on the infamous rack. While suffering, he united himself to the sufferings of Christ and afterward manged to write to his superior that it seemed to him as though he experienced the hidden stigmata. He no longer felt the pains of the rack. He was profoundly moved.
St. Alexander Briant was chosen to be executed with St. Edmund Campion and St. Ralph Sherwin at the Tyburn gallows, December 1581.
He was a serene presence for both priests who suffered before him and the crowd came to look upon the young Fr. Briant as an angel for his face was radiant with light. He earned his crown of martyrdom on December 1st and was canonized a Saint in 1970.

Our unique film production style has been praised for not only presenting facts and biographical information but a prayerful and spiritual film experience.

Our film about Saint Alexander Briant is available through our online shops:

From a young Catholic boy in Somerset to a hunted missionary priest in the City of London, St. Alexander Briant gained a reputation throughout Elizabethan England for being a Catholic force of good. He preached the Truths of the Faith not only during his celebration of the outlawed Mass, the priesthood and the Sacraments but in the shining example of his young, fervent life. Father Alexander Briant traveled the country in disguise, sharing hidden lodgings with Fr Robert Persons who organised great Catholic missions for the hunted missionary priests. Although he was eventually arrested, his time before his trial and death was spent showing everyone the power of prayer. He declared that he was a Soldier of the Cross and stood like an angel of encouragement for his fellow Martyr Saint Edmund Campion.
Saint Alexander Briant is one of the 40 Martyrs of England and Wales.