RICHARD GWYN was born about 1537, at Llanidloes in Powys. He studied at both English universities, married and became a schoolmaster, teaching for 16 years at various places in Flintshire and Denbighshire. At a date unknown he was reconciled with the Church, and in a 'drive' against Catholic schoolmasters in 1580 he was arrested.

For four years he was carried from jail to jail in chains, brought up at eight assizes, fined absurd sums, tortured. At times he solaced himself by writing verses, in his native Welsh; some of it has survived. 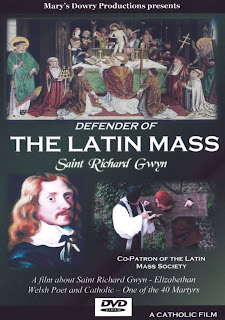 At his last assizes, at Wrexham, he was arraigned for trying to reconcile a man with the Church, and for maintaining that the pope, as successor of St Peter, was head of the Church. The evidence was suborned, the jury packed and subservient.

Saint Richard Gwyn's wife was brought into court, baby in arms, to be admonished, but she rounded on the sheriff and said: "If you want blood, take my life as well as his! Give the witnesses a little bribe, and they will give evidence against me, too!"

She was sent to prison.

A few days later, on 15th October 1581, Saint Richard Gwyn was butchered at Wrexham, "paying my rent" as he put it, "before rent-day".

His last words, uttered in Welsh as he was disemboweled, were, "Jesus, have mercy on me!"

Saint Richard Gwyn was the first Martyr during Penal times to be executed in Wales. He was canonized by Pope Saint Paul IV in 1970.