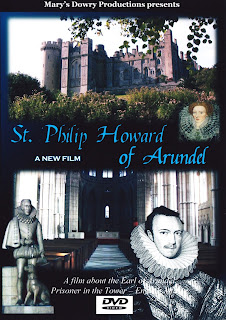 Saint Philip of Arundel:
St. Philip Howard was the Earl of Arundel in West Sussex where his beautiful castle stands today.  The castle is featured in this film.  He was also Queen Elizabeth I's cousin.  St. Philip became a Catholic during a troubled time in Elizabethan England.  He loved to pray and was able to keep his beloved dog with him in the Tower of London.  His shrine is in Arundel Cathedral and his life gives us an inspiring story of kindness and the fruits of the Holy Spirit.  St. Philip tells his story in his own words with beautiful contemplative music composed in a medieval and contemporary style.

In 2007 Mary’s Dowry productions created a new form of film media to present the lives of the saints. Mary’s Dowry Productions recreates stunning silent visuals, informative, devotional narration, and original contemplative music that touches your spirit to draw you into a spiritual encounter with the saint. Watch with your spiritual eye, listen with your spiritual ear. Our films seek to offer a window into the lives of our saints. Using your spiritual senses we invite you to shut out the world, sit prayerfully and peacefully and go on a journey of faith, history and prayer with this Elizabethan Saint.
Length and Format:
The film runs for 30 minutes and is available on Region Free DVD worldwide.
Born in the Strand, London, he was the only child of Thomas, Duke of Norfolk, and Lady Mary FitzAlan, daughter of Henry, Earl of Arundel. He was baptised at Whitehall Palace with the Royal Family in attendance, and was named after his godfather, Philip II, King of Spain. Philip Howard was born during the upheaval of the Reformation. His home from the age of seven was a former Carthusian monastery. At the age of fourteen, he was married to his stepsister, Anne Dacre. He graduated at St John's College, Cambridge in 1574 and was about eighteen when he attended Queen Elizabeth's Court.[3] His life had been a frivolous one both at Cambridge and at Court where he was a favourite of the Queen.
On 1 October 1569, Philip Howard's father the Duke of Norfolk was arrested for his intrigues against Queen Elizabeth I. His father was attainted and executed in 1572, but Philip Howard succeeded to his mother's inheritance upon the death of his grandfather, becoming Earl of Arundel in 1580. He was present in 1581, at a debate in the Tower of London between, Fr Edmund Campion, Jesuit, Fr Ralph Sherwin, and a group of Protestant theologians. He was so impressed by the Catholics that he experienced a conversion moment. He renounced his previous, frivolous life and was reconciled with his wife.
Saint Philip Howard, with much of his family, remained Catholic recusants during the reign of Queen Elizabeth. They also attempted to leave England without permission. While some might have been able to do this unobserved, Arundel was second cousin (once removed) of the Queen. He was betrayed by a servant and arrested not long after his ship set sail from Littlehampton.Howard was committed to the Tower of London on 25 April 1585. While charges of high treason were never proved, he spent ten years in the Tower, until his death of dysentery. Queen Elizabeth never signed the death warrant, but Philip was never told.
Saint Philip Howard was kept constantly in fear of execution, although comforted by the companionship of a dog, which served as go-between with Philip and other prisoners, most notably the priest Saint Robert Southwell. Although these two great men never met, Philip’s dog helped them to deepen their friendship and exchange encouragement in each other's plight. Philip loved his pet, who is remembered along with him in a statue at Arundel Cathedral.
One day Philip scratched into a wall of his cell these words: "Quanto plus afflictiones pro Christo in hoc saeculo, tanto plus gloriae cum Christo in futuro" – 'the more affliction [we endure] for Christ in this world, the more glory [we shall obtain] with Christ in the next' (cf. Rom 8).
He had petitioned the Queen as he lay dying to allow him to see his wife and his son, who had been born after his imprisonment. The Queen responded that "If he will but once attend the Protestant Service, he shall not only see his wife and children, but be restored to his honors and estates with every mark of my royal favor." To this, Philip is supposed to have replied, "Tell Her Majesty if my religion be the cause for which I suffer, sorry I am that I have but one life to lose." He remained in the Tower, never seeing his wife or daughter again and died alone on Sunday, 19 October 1595.He was immediately acclaimed as a Catholic Martyr.
He was buried without ceremony beneath the floor of the church of St Peter ad Vincula, inside the walls of the Tower. Twenty nine years later, his widow and son obtained permission from King James I of England to move the body to the Fitzalan Chapel located on the western grounds of Arundel Castle. Some of his bones are also found within his shrine at Arundel Cathedral.
He was attainted in 1589, but his son Thomas eventually was restored in blood and succeeded as Earl of Arundel, and to the lesser titles of his grandfather.
Saint Philip Howard is one of the patron saints of the Diocese of Arundel and Brighton. Arundel Cathedral, originally known as the Church of St. Philip Neri, was commissioned by the 15th Duke of Norfolk in 1868. It was created a Cathedral in 1965 and its dedication was changed to Our Lady and St. Philip Howard in October 1970. His tomb was moved to the Cathedral in 1971 and remains a site of pilgrimage.
Our film about Saint Philip Howard is available on DVD through:
www.marysdowryproductions.org
Posted by MarysDowryProductions at 10:01