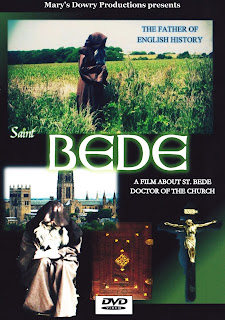 Bede: Bǣda or Bēda; 672/673 – 26 May 735), also referred to as Saint Bede or the Venerable Bede (Latin: Bēda Venerābilis), was an English Catholic monk at the monastery of Saint Peter at Monkwearmouth and its companion monastery, Saint Paul's, in modern Jarrow (see Monkwearmouth-Jarrow), County Durham, both of which were then in the Kingdom of Northumbria. He is well known as an author and scholar, and his most famous work, Historia ecclesiastica gentis Anglorum (The Ecclesiastical History of the English People) gained him the title "The Father of English History".
In 1899, Saint Bede was made a Doctor of the Church by Pope Leo XIII; he is the only native of Great Britain to achieve this designation (Anselm of Canterbury, also a Doctor of the Church, was originally from Italy). Bede was moreover a skilled linguist and translator, and his work made the Latin and Greek writings of the early Church Fathers much more accessible to his fellow Anglo-Saxons, contributing significantly to English Christianity. Bede's monastery had access to an impressive library which included works by Eusebius and Orosius, among many others.
In 2014 Mary's Dowry Productions filmed some prayerful visuals of Saint Bede for a film of his life.
Beautifully uplifting and contemplative music accompanies an informative narrative that, while detailed and filled with historical facts, offers a prayerful way to encounter one of our early Christian Saints.
Saint Bede is available on DVD worldwide through:
www.marysdowryproductions.org
Posted by MarysDowryProductions at 10:21