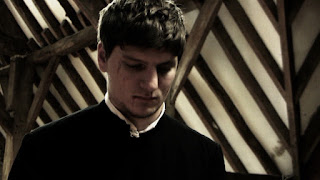 Reading for 12th June
WHEN Father Whitbread, with four companions, was eventually brought to trial, the informers Oates and Bedloe swore to Whitbread having assisted at a meeting in London to kill the king; Bedloe gave as of his own personal knowledge what he had before spoken of as hearsay, and explained that he had intentionally softened his witness on the previous occasion. Judge Wylde told him that he was a confirmed perjurer and ought never enter the courts again, but go home and repent.
Father Whitbread showed the improbability of his conspiring with a man whom he had never seen, and who had been expelled from St Omer for his irregular life. He produced fifteen students who swore that Oates was at St Omer when he swore he was at the meeting in London.
"If this plot existed," urged Whitbread, "in which many persons of honour and quality were engaged, why are there no traces of its evidence, no arms bought, no men enlisted, no provision made for its execution? There was no evidence for the jury but hard swearing."
Speaking for himself and his companions he contrasted the known blamelessness of their lives and the vicious wickedness of their accusers. Nevertheless, Chief-Justice Scroggs directed the jury to find them guilty, and himself sentenced them to death.
"O thou are grown old in evil days, now are thy sins come out...in judging unjust judgements, oppressing the innocent and letting the guilty go free." - Dan. 13. 15-53
From the Mementoes of the Martyrs and Confessors of England and Wales.
Blessed Thomas Whitbread was executed at Tyburn on 20th June 1679
For Catholic films about the English Martyrs
www.marysdowryproductions.org
As seen on EWTN
(Photograph is a screenshot taken from our film 'Saint Alexander Briant')
Keywords
Titus Oates Plot, English Martyr, Tyburn Gallows, London, English history, priest, Catholic, Martyrs
﻿
Posted by MarysDowryProductions at 19:52