SAINT WILFRID: THE APOSTLE OF SUSSEX
A Catholic film by Mary's Dowry Productions 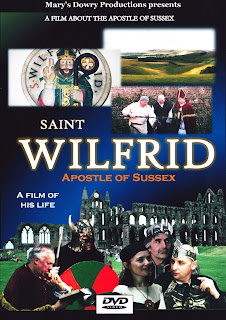 One of our great English 7th century Saints, Saint Wilfrid’s vocation began when he was a young boy. His stepmother was impatient with young Wilfrid and eventually sent him away to the Court of King Oswy where Queen Eanflaed took delight in the deeply pious and fervent boy and became his patron.

The Queen sponsored Saint Wilfrid and sent him to study on Lindisfarne at the monastery founded by Saint Aidan where he learned the whole psalter off by heart and several books. He took a pilgrimage to Rome and brought back relics of the Saints upon his return.

However, before he came back to England, his ship was thrown off course by a freak storm and driven to the coast of Sussex. Here, Saint Wilfrid encountered the South Saxons, a fierce, pagan people who would have warred with the pilgrimage party. Saint Wilfrid was so struck by their zeal and lack of knowledge of the Gospel that he kept the thought of them in his heart and prayers; Our Lord would lead him back some years later to make a lasting impression.

Saint Wilfrid returned to Northumbria and was kept busy over the next several years. He was ordained a Catholic priest and then Bishop and participated in the great Council of Whitby which dealt with the disunity of the Catholic Church in England over a few observances. Because the Irish monks had converted part of Britain and observed a handful of different customs and traditions such as how to wear the tonsure and when to celebrate the Feast of Easter, a council was called to assist with the unification of the Catholic Church in England in these traditions with the Universal Church. Saint Wilfrid was instrumental in explaining the importance of complete unity with the whole Church and aligning the celebration of Easter with the rest of Christendom. He had the support of the great Abbess of Whitby, Saint Hilda and helped to bring about the growth of the Catholic Church when it was agreed to unify the dates with Rome.

Over time, Saint Wilfrid made enemies in the courts of the great Northumbrian kings – he was outspoken against man-made authority over spiritual matters as well as unwavering in the preaching of Catholic truths and important observances. Banished from Northumbria Saint Wilfrid journeyed to the South of England and undertook his mission as the Apostle of Sussex. He converted warring kings, baptised pagans, taught the South Saxons how to fish, worked miracles and was given the Isle of Wight as a gift.

After a long and fascinating life, Saint Wilfrid returned home to Northumbria and lived out the rest of his days in enclosure where he loved prayer, meditation and holy sacrifice. Learn about the inspiring life of this great Saint of England in a film that has been internationally praised for not only presenting information, details and facts but a prayerful and spiritual film experience. As seen on EWTN.

Length and Format: Saint Wilfrid: Apostle of Sussex runs for 30 minutes and is available worldwide on Region Free DVD.