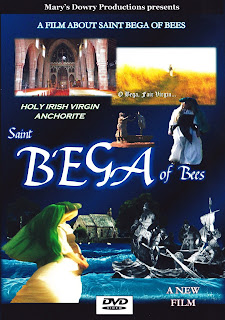 Saint Bega was born in Ireland to a noble family. When her father arranged for Saint Bega to marry the son of a Viking king, Saint Bega decided to flee her home. Led by her guardian angel, Saint Bega escaped the palace during the night and headed for the shore. Since there were no vessels for her to escape in, she cut a large piece of turf and placed it on the waters, praying for a great miracle and promising to dedicate her entire being in service and praise of God. She stood upon the turf and miraculously floated across the seas to the coast of Cumberland and Saint Bees. It was here that Saint Bega made herself a hermitage on the coast where she led a life of deep prayer and solitude.
She would have remained there for the rest of her life had not the threat of attack from pirates scouting the coast become a frightening and dangerous situation.
Saint Bega trusted in the guidance of her angel who had given her a bracelet (this was an important relic of Saint Bega until the Protestant Reformation). She left her hermitage and traveled to Northumbria and the court of the Catholic king Oswy. Seeking his advice and placing her life in his hands, the wise Catholic king called for Saint Aidan of Lindisfarne who met with Saint Bega.
It was decided that in order to safeguard Saint Bega's shining purity and virginity, Saint Bega should join a convent and live in enclosure with the nuns. Saint Aidan himself gave Saint Bega the veil and acted as her spiritual director.
Numerous miracles accompanied Saint Bega's life.
Sadly, after the Protestant Reformation, devotion to Saint Bega and trust in her intercession fell by the wayside. Saint Bega recently came to memory when a popular author wrote a fictional novel using the idea of Saint Bega as the basis of his character.
Her life, however, has always been safeguarded by the Church as an example of holy Catholic purity and devotion and she is now remembered in a film that not only presents facts, details and historical information about Saint Bega of Bees, but a prayerful and spiritual film encounter.

Saint Bega of Bees is available on DVD worldwide from

Saint Bega stands as a powerful help for those asking her protection for their purity, for a greater purity and for other intentions too. She is one of our great Catholic Saints and is also favoured by those who seek solitude and the intercession of the early anchoresses.
Posted by MarysDowryProductions at 10:33