Are you drawn to the Carmelite spirituality? Six Carmelite Films - a NEW Catholic DVD resource

ARE YOU DRAWN TO THE CARMELITE
SPIRITUALITY?
SIX CARMELITE FILMS 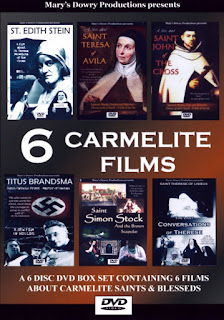 Over the past 10 years, Mary's Dowry Productions has produced a variety of films specifically on the lives and spirituality of several Carmelite Saints. We have now made our six Carmelite Saint films available in a 6 disc DVD box set, being able to reduce the overall price of this due to the use of less materials and production costs!
We have managed to keep the price of each of our DVDs at £10 for the past several years, wanting to make them available as as low a cost as possible to help share the stories and accounts of the Saints and Martyrs of the Church. By having this new Box Set we are able to make available 6 individual films on 6 DVDs at the cost of 3. This is especially great news for the many schools and seminaries who support our apostolate as well as people wishing to have a spiritually informative marathon and encounter with six amazing Carmelite Saints of the Church.

We love the Carmelite Saints and are proud to have Saint Simon Stock as one of our countrymen. He was an important Carmelite friar of 13th Century England, well loved by the Carmelite Order. He was also given the Brown Scapular devotion by Our Lady that is especially recommended to the faithful as a powerful Sacramental today.
Saint Edith Stein and Blessed Titus Brandsma take us from 13th Century England to 20th Century Nazi Europe, where these two Carmelite Saints gave their lives in martyrdom for Christ and the Catholic Church.
Saint Teresa of Avila and Saint John of the Cross were not only major figures in the Catholic Counter Revolution of the 16th century, but both are doctors of the Church and well beloved Saints.
And of course, Saint Therese of Lisieux is one of the most popular Saints of the Church today. We look especially at her Last Conversations and her Carmelite spirituality. 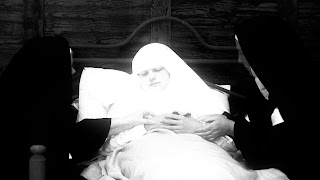 Mary's Dowry Productions loves the Carmelite Saints and Martyrs and is especially pleased to be able to make this NEW box set available on the lives and messages of these six great Carmelite Saints of the Church.