THE CHURCH MILITANT
WHAT'S SO IMPORTANT ABOUT ST MARGARET WARD? 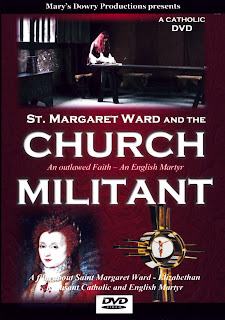 Mary's Dowry Productions was founded in 2007 due to the inspiring account of the life and martyrdom of St Philip Howard, the Earl of Arundel. He was a cousin of Queen Elizabeth I and lived a worldly life at court until he heard the Jesuit missionary priest St Edmund Campion defend the Catholic Faith in the Tower of London. St Philip converted to the Catholic Faith and became a leader of the Catholic faithful in England. The Catholic faithful suffered great persecution and hardships from the Elizabethan Protestant government. Those who remained loyal to the True Faith, the ancient Catholic religion of England, a country known for centuries as Mary's Dowry (consecrated by the Kings of England to Our Lady as Her Dowry), were known as recusants. Recusants refused to attend the state Protestant services and many of them helped to hide hunted Catholic missionary priests. The Mass, Sacraments, sacramentals (such as rosaries) and even lighting devotional candles were all illegal. Yet these recusants kept the Faith alive and remained steadfast in the face of terrible threats and punishments. They were the Church Militant of Penal Times.
Saint Margaret Ward was a recusant Catholic and a member of the Church Militant. A young Catholic single woman, Margaret was especially devoted to the Catholic priesthood and worked with the underground Catholic movement that smuggled about forbidden Sacramentals and organised missionary routes for Catholic priests.
When Saint Margaret heard that a Catholic priest in Bridewell prison had renounced his priesthood and the Catholic Faith, she began to visit him with the intention of encouraging him to remain strong. Eventually, fearing for his soul, Saint Margaret decided to break him out of prison where he was still vacillating and had the courage to enlist the help of an Irish Catholic boatman. She smuggled rope into the prison cell and the priest agreed to break out. All would have gone well had not the priest cried out loudly when he landed on the ground, alerting the guards.
St Margaret was arrested, as was the Irish boatman, Blessed John Roche. Margaret was detained for 10 days, tortured, questioned, harassed and offered her freedom if she told the government the names of other recusant priests and denounced the 'Popish Religion'.
She refused and remained loyal to the end.
Saint Margaret Ward was hanged at Tyburn by order of the Queen and government for her Catholic Faith. She is, along with St Philip Howard, one of the 40 Martyrs of England and Wales.
Both St Margaret and St Philip worked tirelessly as part of the Church Militant.
Saint Margaret Ward is a powerful and important Catholic intercessor today.

Our film about St Margaret Ward is available on DVD from: