Saint Richard of Chichester and his Ecclesiastical statutes, Catholic Bishop and Saint of England

This weekend (June 16th 2018) saw us remember the life and witness of Saint Richard of Chichester. Saint Richard is local to Mary's Dowry Productions, being 20 miles away from where we are. His relics were housed in the once Catholic Cathedral in Chichester until the Protestant Reformation when they were destroyed. Saint Richard is often portrayed as an Anglican Saint, when in fact he was as Roman Catholic as you can get. He was so outspoken about the importance of the rubrics of the Mass and the sacredness of the priesthood that he made a lot of enemies. He valued the 7 Sacraments, fasted, wore a hair shirt and defended the Truths of the Catholic Faith in many blunt ways. St Richard also condemned 'married clergy' and wrote his famous statutes for pulling up priests in their vocation and duties. 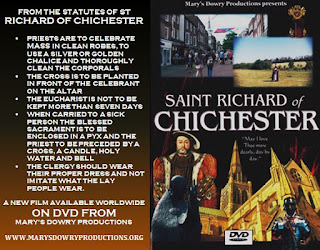 In our film about St Richard we take a look at the history of Chichester, once a Roman Catholic city, looking at the Roman walls that remain around the city and the history of the Cathedral, as well as on location in Tarring where St Richard lived while exiled from the Cathedral by the king. It was in Tarring that he cultivated figs and we visit the ancient fig gardens too. More importantly, we present St Richard's life and words and how relevant he is to Catholics today.
Saint Richard of Chichester film is available worldwide on DVD at this link: