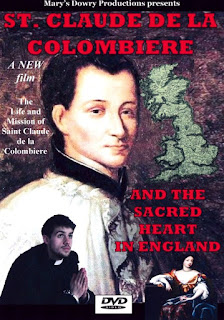 Now available on DVD, our completed film takes us on a journey from 17th century France, direct from Paray-le-Monial to England, where Saint Margaret Mary's confessor Saint Claude de la Colombiere, a Jesuit priest, was sent to be the preacher to the Duchess of York, Mary of Modena, the devoutly Catholic wife of the future King James II of England (the last Catholic Monarch).
Not only do we look at Saint Claude's life but we see how he was chosen specifically by God to take the Sacred Heart of Jesus devotion to England, where it took root and began to spread among the faithful Catholics in the midst of fresh persecutions during the infamous 'Titus Oates Plot'.
We look at England in the 17th century, including King Charles II and his Catholic brother, heir to the throne in England, James, who would become the rightful King only to be exiled by the Protestant usurper William of Orange, who took the throne and reigned with Mary, James' Protestant daughter.
We also look at Saint Claude's willingness to give his life in martyrdom for the English to return to the True Faith, his secret meeting with Saint John Wall, a Franciscan priest who had laboured for 22 years in England and a future English Martyr; Saint Claude's imprisonment and exile during the Titus Oates Plot, and the spread of the devotion to the Sacred Heart of Jesus throughout England in the centuries that followed, especially looking at the first shrine to the Sacred Heart of Jesus in Maryvale, Birmingham and its link to Blessed John Henry Newman.

This new film offers an inspiring and encouraging look at God's plan for England during the anti-Catholic persecutions, in a country once named 'Mary's Dowry', showing that Our Lady continues to watch over the land dedicated specifically to her.

'Saint Claude de la Colombiere and The Sacred Heart of Jesus' is NOW available on DVD from Mary's Dowry Productions, through our Amazon accounts ('Mary's Dowry' seller) or worldwide from our online shop here: 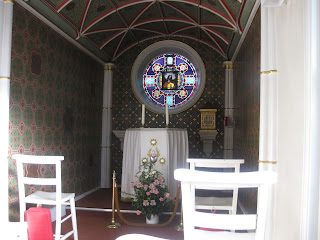