The Garnets and The Gunpowder Plot, a Catholic perspective, an English Martyr. 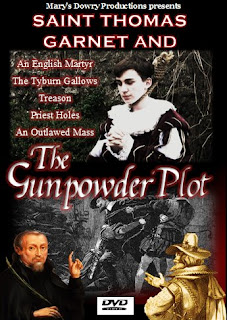 Saint Thomas Garnet was the nephew of Father Henry Garnet, the head of the Jesuits in England during the Elizabethan and Jacobean persecutions of the Catholic Church.

When Father Henry Garnet learned about the Gunpowder Plot from one of the conspirators in Confession, the Jesuit priest wrote to Rome asking the Church to warn English Catholics not to use force against the oppressive, anti-Catholic government.

His nephew Thomas travelled England, illegally administering the outlawed Sacraments and offering the Holy Sacrifice of the Mass. His uncle admitted him into the Jesuit Order.

When he was captured in the aftermath of the Gunpowder Plot and it was discovered he was the nephew of Father Henry Garnet, Father Thomas Garnet was imprisoned in the Tower of London with Father Henry and suffered much but was released when no evidence connecting him could be produced.

Exiled, yet longing to assist the Catholics in his homeland, young Father Thomas returned once more in disguise and worked courageously for the Catholic Faith. He was finally captured, imprisoned, sentenced to death at his trial and gave his life joyfully at Tyburn in 1608. He was canonized an English Saint and Martyr in 1970.

In ‘St Thomas Garnet and The Gunpowder Plot’, Mary’s Dowry Productions presents a film about an English Martyr, English history, priest holes, safe houses, secret Mass rooms, illegal Sacraments, gunpowder, treason and plots as we remember those who fought for the Truths of the Catholic Faith before us and have left us an heroic example.

We also look at St Nicholas Owen, another of the 40 Martyrs of England and Wales who travelled with Father Henry Garnet.

'St Thomas Garnet and The Gunpowder Plot' presents this infamous 'plot' from a Catholic historical perspective.

It will be available July 2018 from Mary's Dowry Productions online shop: