As most of our readers know, our Catholic film production apostolate Mary's Dowry Productions was founded in 2007 and is named after an ancient title for England, which was especially consecrated by the early kings of England to the Mother of God as her Dowry. With the re-consecration of England to Our Lady as her Dowry due to take place in 2020, we are finally organizing a film that will present the history of this unique and special title for England and its place in the Catholic Church and our times. 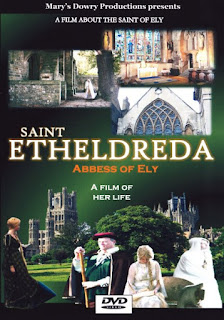 We now have over 86 DVDs, many about our early British Saints such as Saint Bede and Saint Etheldreda, as well as important Catholic Saints of the Middle Ages such as Saint Julian of Norwich, and especially of the English Martyrs of the 16th and 17th centuries when the attack upon the True Faith of England was especially fierce and destructive. With these images and footage acquired we will be able to provide a film that covers 2000 years of Catholic history in England and the significance of the title that England bears.

England is rich with the history of devotion to Our Lady which can even be traced back to the first century and begins in Glastonbury, with Glastonbury thought to be the birthplace of Mary's Dowry and in fact, the birthplace of Christianity in England. It holds the site of the first Christian Church, a place that was for centuries regarded as the English Jerusalem and one of the holiest places on earth.

It is interesting that Glastonbury is now renowned for occult shops, paganism, New Age and music festivals. At the Protestant Reformation of the 16th century the devil inspired the English heretics to specifically reject the Mother of God from England and they burned ancient and venerated statues of Our Lady (including the Saxon statue of Our Lady of Walsingham) in towns and cities such as Chelsea. Today, 'the sacred and the profane stalk the streets of Glastonbury in the shadow of the ruined abbey' - a loud proclamation to those that have ears to hear and eyes to see of 'the conflict of light and darkness every present in a palpably spiritual atmosphere' (Shrines of Our Lady in England).

We shall be travelling to Glastonbury next year to present part of our documentary 'England: Our Lady's Dowry', as well as several other locations. We are especially pleased to be able to present from Storrington, a town not far from us, which houses the priory of Our Lady of England, another important title for Our Lady. The little forgotten Shrine statue of Our Lady of England is kept above a door in the church in the priory, which has a whole fascinating history of its own which is very hard to discover. 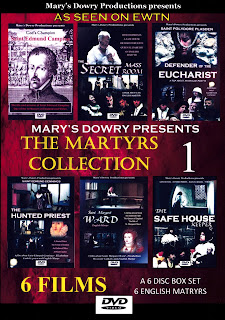 In our 2012 film about Our Lady of Walsingham we brought in the great significance of the English Martyrs. We look forward to doing this too in our upcoming film about the title of 'Our Lady's Dowry'. We shall be producing a separate film about 'Our Lady of Glastonbury' too, including a look at Saint Dunstan and the last abbot of Glastonbury who was hung from the Tor by King Henry VIII for refusing to deny the Catholic Faith.

"Glastonbury is the foundation stone of the Dowry of Mary" (Anne Vail) and 2019 looks to be a special year for film productions by Mary's Dowry Productions.

Meanwhile, check out our website for a full listing of our Catholic DVDs on the Saints and English Martyrs: