Exiled Bishop, Saint Wilfrid, Celtic Christianity and the history of the Faith in England 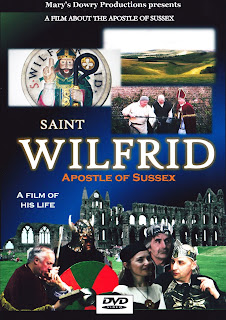 Looking at the life of Saint Wilfrid, known as the Apostle of Sussex, this film offers a way to encounter the life of one of our early Catholic Saints.

In 2009 Mary's Dowry Productions filmed key moments from the life of Saint Wilfrid which run silently beneath the narrative of his life, told in his own words. Original contemplative and uplifting music offers a blend of Celtic and contemporary themes, a key part in the presentation.


In 2007 Mary’s Dowry productions created a new form of film media to present the lives of the saints. Mary’s Dowry Productions recreates stunning silent visuals, informative, devotional narration, and original contemplative music that touches your spirit to draw you into a spiritual encounter with the saint. Watch with your spiritual eye, listen with your spiritual ear. Our films seek to offer a window into the lives of our saints. Using your spiritual senses we invite you to shut out the world, sit prayerfully and peacefully and go on a journey of faith, history and prayer with this inspiring Saxon Saint.

Wilfrid (originally spelled Wilfrith; 633 – c. 709) was an English bishop and saint. Born a Northumbrian noble, he entered religious life as a teenager and studied at Lindisfarne, at Canterbury, in Gaul, and at Rome; he returned to Northumbria in about 660, and became the abbot of a newly founded monastery at Ripon. In 664 Wilfrid acted as spokesman for the Roman position at the Synod of Whitby, and became famous for his speech advocating that the Roman method for calculating the date of Easter should be adopted. His success prompted the king's son, Alhfrith, to appoint him Bishop of Northumbria. Wilfrid chose to be consecrated in Gaul because of the lack of what he considered to be validly consecrated bishops in England at that time. During Wilfrid's absence Alhfrith seems to have led an unsuccessful revolt against his father, Oswiu, leaving a question mark over Wilfrid's appointment as bishop. Before Wilfrid's return Oswiu had appointed Ceadda in his place, resulting in Wilfrid's retirement to Ripon for a few years following his arrival back in Northumbria.


After becoming Archbishop of Canterbury in 668, Theodore of Tarsus resolved the situation by deposing Ceadda and restoring Wilfrid as the Bishop of Northumbria. For the next nine years Wilfrid discharged his episcopal duties, founded monasteries, built churches, and improved the liturgy. However his diocese was very large, and Theodore wished to reform the English Church, a process which included breaking up some of the larger dioceses into smaller ones. When Wilfrid quarrelled with Ecgfrith, the Northumbrian king, Theodore took the opportunity to implement his reforms despite Wilfrid's objections. After Ecgfrith expelled him from York, Wilfrid travelled to Rome to appeal to the papacy. Pope Agatho ruled in Wilfrid's favour, but Ecgfrith refused to honour the papal decree and instead imprisoned Wilfrid on his return to Northumbria before exiling him.
Wilfrid spent the next few years in Selsey, where he founded an episcopal see and converted the pagan inhabitants of the Kingdom of Sussex to Christianity. Theodore and Wilfrid settled their differences, and Theodore urged the new Northumbrian king, Aldfrith, to allow Wilfrid's return. Aldfrith agreed to do so, but in 691 he expelled Wilfrid again. Wilfrid went to Mercia, where he helped missionaries and acted as bishop for the Mercian king. Wilfrid appealed to the papacy about his expulsion in 700, and the pope ordered that an English council should be held to decide the issue. This council, held at Austerfield in 702, attempted to confiscate all of Wilfrid's possessions, and so Wilfrid travelled to Rome to appeal against the decision. His opponents in Northumbria excommunicated him, but the papacy upheld Wilfrid's side, and he regained possession of Ripon and Hexham, his Northumbrian monasteries. Wilfrid died in 709 or 710. After his death, he was venerated as a saint.
Historians then and now have been divided over Wilfrid. His followers commissioned Stephen of Ripon to write a Vita Sancti Wilfrithi (or Life of Wilfrid) shortly after his death, and the medieval historian Bede also wrote extensively about him. Wilfrid lived ostentatiously, and travelled with a large retinue. He ruled a large number of monasteries, and claimed to be the first Englishman to introduce the Rule of Saint Benedict into English monasteries. Some modern historians see him mainly as a champion of Roman customs against the customs of the British and Irish churches, others as an advocate for monasticism.
.﻿
Posted by MarysDowryProductions at 18:03