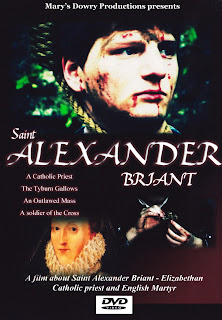 Saint Alexander Briant:
A touching and thought provoking journey with a very young and holy Catholic priest whose spiritual insight and wisdom of the Catholic Faith gave hope to the people of his day.  Although linked to St. Edmund Campion, his story stands alone, edged with the mystical.  From a young boy in Somerset to a young priest in the City of London, St. Alexander's story is filled with peace, encouragement and inspiration.
In 2012 we filmed some scenes from the life of Saint Alexander Briant. These included his early life of study, his work on the English Mission and his joyful spirit in prison and at trial. Saint Alexander Briant's story is one of inspiring hope especially living as a Catholic in troubled times.

In 2007 Mary’s Dowry productions created a new form of film media to present the lives of the saints. Mary’s Dowry Productions recreates stunning silent visuals, informative, devotional narration, and original contemplative music that touches your spirit to draw you into a spiritual encounter with the saint. Watch with your spiritual eye, listen with your spiritual ear. Our films seek to offer a window into the lives of our saints. Using your spiritual senses we invite you to shut out the world, sit prayerfully and peacefully and go on a journey of faith, history and prayer with this young and holy priest.
Length and Format:
The film runs for 30 minutes and is available worldwide on Region Free DVD.
www.marysdowryproductions.org

Saint Alexander Briant (17 August 1556 – 1 December 1581) was an English Jesuit and martyr, executed at Tyburn. He was born in Somerset, and entered Hart Hall, Oxford (now Hertford College), at an early age. While there, he became a pupil of Father Robert Parsons and he completed his studies with him at Balliol College, which, along with his association with Richard Holtby, led to his conversion.


After leaving university, he entered the English College at Reims then went to the English College, Douai, and was ordained priest on 29 March 1578. Assigned to the English mission in August of the following year he laboured with zeal in his own county of Somerset.
A party of the persecution, searching for Father Parsons, placed Alexander Briant under arrest on 28 April 1581, in the hope of extorting information. After fruitless attempts to this end at Counter Prison, London, he was taken to the Tower of London where he was subjected to torture. With six other priests he was arraigned on 16 November 1581, in Queen's Bench, Westminster, on the charge of high treason, and condemned to death.

In his letter to the Jesuit Fathers he says that he felt no pain during the various tortures he underwent, and adds: "Whether this that I say be miraculous or no, God knoweth." He was twenty-five years old when he was executed by being hanged, drawn and quartered on 1 December 1581; Edmund Campion and Ralph Sherwin were also executed with him.
Alexander Briant was declared venerable on 8 December 1921 by Pope Pius XI and beatified one week later on 15 December. Blessed Alexander Briant was canonized nearly forty-nine years later in 1970 by Pope Paul VI as one of the Forty Martyrs of England and Wales with a common feast day of 25 October. His feast day is celebrated on 1 December, the day of his martyrdom.