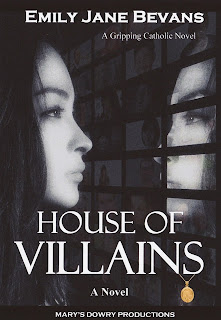 Yesterday was the feast of Blessed James Alberione, a great Evangelist of the Rosary and a Catholic media apostle. He was ahead of his time in his ardour for using social communication as a means of spreading the Gospel and was one of the greatest pioneers in the field of Catholic media.
I happened to come across his biography while reading a book 'Champions of the Rosary' on the evening of 25th November. I actually opened the page on his biography in the book and saw that his feast day was 26th November. I looked at my bedside clock and saw that it was 12:08 am - the 26th November, so naturally I felt a connection to him even though that was the first time he had specifically come onto my radar.

Last week I had a break from editing our films having completed the editing for our new film 'SAINT PADRE PIO: PRAY, HOPE AND DON'T WORRY' which is now ready for its music score. I planned to go straight on to editing our film about 'Saint Margaret Mary and the Sacred Heart of Jesus' (I am especially excited abut this because we cover a lot of information about the introduction of the Sacred Heart devotion in England by Saint Margaret Mary's spiritual director, St. Claude de la Colombiere) but I needed a break from film editing so spent some time preparing my book for publication in paperback.

My book 'House of Villains' has been written over a long time during recreational breaks from Mary's Dowry Productions and 'paid' work. Having worked full time for ten years running a chain of second hand and antiquarian bookshops in Arundel, Worthing and Chichester on the south coast of England, I encountered the power of the written word on a daily basis. So many people read and there is a great opportunity to place many elements and Truths of the Faith within the literature of our current culture, especially for younger people and avid novel readers. This is a great field of warfare considering the shocking amount of anti-moral and anti-Christian literature encountered on a daily basis and popularized within the secular media. I enjoy to read and like an absorbing novel from time to time and, having always liked to write, I saw the appeal of authoring a contemporary novel that, as well as being a contemporary read, would include many elements of our wonderful Catholic faith, understanding and teaching throughout.
The contemporary woven with the timeless, relevant on so many levels.

My novel 'House of Villains' is part of a trilogy, with a prequel to 'follow', and this first volume is available to read on Kindle with the paperback edition in progress as of this week. I write for myself, the kind of story I would enjoy, with elements of the crime, romance and thriller genres.
Here is the blurb followed by the link to the book currently available in E-Format through Amazon:

In this new gripping Catholic novel from award winning Catholic screenwriter and Co-Founder of internationally acclaimed Catholic film apostolate Mary's Dowry Productions, we enter a contemporary literary world teeming with everything a Catholic reader will enjoy. Rich with elements of the Catholic Faith, this is a journey with a young woman who lives in a fallen world, where the realities of the spiritual struggle against human frailty test her to her limits, where the war against vice and corruption, of holding firm to trust, virtue and hope has captured many hearts, unfolding in the setting of a journey praised for its absorbing literary style, details and realism, for the celebration of English heritage, human relationships and imagination. This is a story about Faith, a story of courage in a world of corruption; a journey of fierce hope, of stark grief, of the power of Catholic Truths, of Catholic men and women, and of heroic forgiveness. A young woman lives in virtual seclusion in her late mother's magnificent estate on the south coast of England. Controlled by her family, she is only weeks away from gaining freedom from the dark, oppressive tyranny she exists in. The faith of her childhood sustains her, as does the belief that soon, everything will change. And it does. In ways that even she could not have imagined. Dark forces are at work but so are the workings of grace. Villains, heroes and ordinary people combine in this new fictional novel. House of Villains is the first volume in a new literary trilogy especially aimed at an audience that enjoys a long, contemporary read woven with elements of the Catholic Faith, careful details and descriptions, an unfolding gripping plot and unforgettable characters. 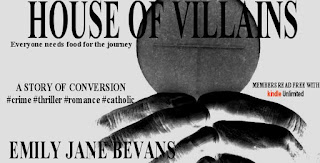 I was especially struck by the life of Blessed James Alberione over the last few days, including many of his quotes on the power of the Rosary. He had several defining moments in his Catholic media mission. Our Lord’s light revealed him the direction of his whole life. During a nocturnal adoration on January 1, 1901, when he was just sixteen years old, he placed his life before God, and “a particular illumination came from the Host” (AD15). At that moment Blessed James Alberione understood Jesus’ invitation, “Come to me, all of you…” (Mt 11, 28). With this call, he sensed a clarification of his vocation to priesthood and felt a need of an organized undertaking to which others would be associated. On June 29, 1907 James Alberione was ordained a priest. In the following year he was appointed by his bishop to become the spiritual director of the diocesan minor and major seminarians and also be part of the seminary’s teaching faculty.

In the year 1910, amidst an ongoing discernment on how and what could be done to Jesus’ call, “Come to me, all of you..,” to be heard and welcomed by others, Blessed James had an idea of
“… an organization of writers, technicians, book-sellers and retailers, Catholics whom he would give direction, work and a spirit of apostolate…” (AD 23).
The young priest envisioned a “society of persons who would love God with all their mind, all their strength, all their heart; persons who would offer to work for the Church, happy with the wages God pays” (AD 23-24).

One of his favorite titles for Our Lady was “Queen of the Apostles.”

Emily Jane Bevans lives on the south coast of England. For ten years she worked in, and helped to manage, a family chain of antiquarian bookshops in Worthing, Arundel and Chichester in West Sussex. She is the co-founder and co-director of a UK based Catholic film production apostolate ‘Mary’s Dowry Productions’. She writes, edits, produces, directs, narrates and sometimes acts for the company’s numerous historical and religious films on the lives of the Saints and English Martyrs. She also likes to write contemporary and historical Catholic fiction for women. She is the daughter of internationally renowned Catholic artist, Gary Bevans, who is most famous for painting an exact replica of the Sistine Chapel Ceiling in Goring-by-Sea, England. Her love for English history, stately historic houses, adventure films and her Christian faith is the foundation of her writing. In 2010, Emily Jane Bevans and her sister Bernadette Bevans were awarded Catholic Women of the Year 2010 for their work in Catholic Media Evangelization.
Posted by MarysDowryProductions at 14:26