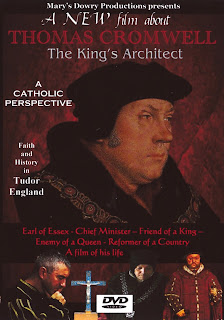 NEWLY released and available now is our film about Thomas Cromwell, King Henry VIII's collaborator and architect - A CATHOLIC PERSPECTIVE.
This film was previously available as The King's Collaborator which also proved very popular with secular viewers, but many secular viewers complained that it was very 'biased towards Catholicism' since it was not the usual production they encountered...
So, new cover, clear content description, same film.

If you have not seen our film production about Thomas Cromwell, which looks at the Protestant Reformation in England, King Henry VIII's break with Rome, the Martyrdoms of St Thomas More and St John Fisher, England's Catholic heritage, history and more, it is available through our online shop here:

We also have a NEW shorter version of the life of Thomas Cromwell under the previous title of The King's Collaborator which is specifically targeted for a more secular audience but with many Catholic Truths and facts in the history of England throughout.

We ship worldwide in all region formats.

If you buy our DVDs through AMAZON be sure only to use our Mary's Dowry Productions Seller shop - there are other sellers on there claiming to sell our DVDs NEW at higher prices - they order through us while adding their own profit and people unnecessarily pay extra money through a third party seller.
Posted by MarysDowryProductions at 08:52