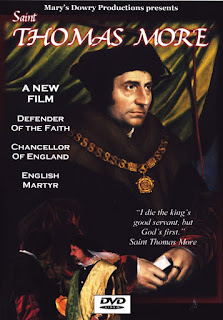 “I die the king’s good servant, but God’s first.”
These were among the last words of Saint Thomas More, one of the greatest Statesmen that England has ever seen. He was a Tudor lawyer who thought for a time that he was called to be a Carthusian. Instead, he followed his vocation to the married state where he raised a family in love of God and the Catholic Church. Renowned throughout Christendom for his great mind and deep humility, King Henry VIII appointed him Chancellor of England and hoped Sir Thomas More would support the King’s schism from the Church. When Saint Thomas More refused, the King stripped him of his position and titles and eventually had him incarcerated in the Tower of London. After an unjust trial and to the horror of the country and indeed beyond, Saint Thomas More was beheaded at Tower Hill in 1535. He was canonized a Saint and English Martyr. Saint Thomas More has left the Catholic Church not only a brave witness to the Faith but several notable works and prayers.

Mary’s Dowry Productions’ unique film style has been internationally praised for not only presenting facts and biographical information but a prayerful, spiritual film experience.

Length and Format: The film runs for 66 minutes and is available on Region Free DVD worldwide from: