Over the past 13 years we have spent many a Saturday in THE BARN attached to our local Catholic Church 'English Martyrs' in Goring-by-Sea, filming on sets with a variety of props.

In January, two of the Mary's Dowry Productions team (founders Bernadette and Emily) headed over to our local historic town of Arundel for a rummage about the antique shops looking for some new and interesting props to dress several sets we will be filming on in March this year.

Arundel is where Mary's Dowry Productions began in 2007 with the inspiration to produce a film about the life of English Martyr Saint Philip Howard whose castle is shown above (renovated and extended in the 19th and 20th centuries) and whose Shrine is located in Arundel Cathedral.

Emily ran the secondhand bookshop in Arundel for almost 10 years (2003-2012) so the first port of call was in the antique shop next door to the bookshop. (If you like to read, Emily pens novels based upon her years of book-selling which are available on our website in paperback and from AMAZON on Kindle Unlimited, Kindle and paperback worldwide - all proceeds go towards producing the films of Mary's Dowry Productions) : BOOK LINK UK

A delightful surprise was to stumble upon this original modern oil painting of Saint Philip Howard hanging on a wall on the 4th floor of the antique shop. Sadly we don't have any room for it but for any Saint Philip Howard fans this is a beautiful work of art priced at £85 if you are in the town!

After a good rummage and discussion six NEW old items were purchased for March's filming day.

We look forward to placing them in our sets!

This March we will be producing three more films about three more Martyrs for the group 'The 40 Martyrs of England and Wales': 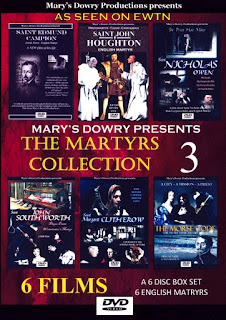