Sorting out the film prop garage

This week we paid a visit to a friend's garage. He stores the props for Mary's Dowry Productions because we don't have a garage ourselves. It's very kind of him because it means we can keep backdrops and numerous furniture and boxes of props we use when we have filming days.

The last filming day we had was in March 2018. Since 2008 we have incorporated filming key moments from the lives of the Saints and Martyrs in specific backdrops in the 18th century barn attached to our parish church of the English Martyrs near Worthing.

This means that friends and parishioners don a costume and portray a Saint for us, and they do a wonderful job. Because we have a mixed media style of production, we combine sacred art, film footage, narration and music to present the life of a Saint in film. This means that we can film all day without worrying about sound, we don't use the sounds. This is a good thing because the barn is close to a busy road and the day is peppered with ambulance sirens and motorbike engines - not at all fitting for an Elizabethan Era! 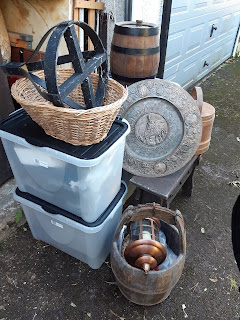 The consensus is to keep the cobwebs that have accumulated on the props. So that will be a fun filming day. We shall be using various items in the sets we shall be dressing in March for three new films about 3 of the 40 Martyrs of England and Wales. 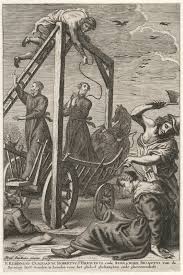 This March we have planned (and are still planning) a filming day in the barn to acquire scenes from the lives of Saint Ralph Sherwin, Saint John Kemble and Saint David Lewis. We will also be heading off into the Sussex hills on a separate day to acquire film of our missionary Martyrs travelling.

We are excited to be able to make available through film media a biographical and spiritual look at the life of each of these Martyrs. More updates soon!