Over the past year we have been making our films about the Saints and English Martyrs available digitally for INSTANT viewing.

At Mary's Dowry Productions VIMEO Channel you can watch all of our films (more added regularly) on iPhones, Tablets, iPads, Smart TVS, with Roku, Android and other devices and services.

This is a fantastic way to watch the films of the Saints and English Martyrs on your digital devices, with free clips and trailers available too.

We have had an overwhelming amount of positive feedback for making our films available digitally which has evolved into a new Catholic Film Club invitation for anyone, anywhere, to come along and get to know the English Saints, Universal Saints and English Martyrs through the new media. 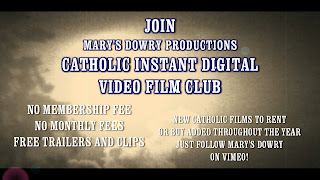 THIS YEAR - 2020 - we will be releasing NEW films about the English Martyrs and Saints. Look out for SAINT ALBAN ROE which will be available in the first week of February.
Posted by MarysDowryProductions at 10:52