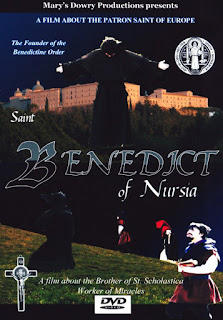 Saint Benedict of Nursia (Italian: San Benedetto da Norcia) (c. 480 – 543 or 547) is a Catholic saint, honoured by the Catholic Church as the patron saint of Europe and students.
Saint Benedict founded twelve communities for monks at Subiaco, Italy (about 40 miles (64 km) to the east of Rome), before moving to Monte Cassino in the mountains of southern Italy. The Order of St Benedict is of later origin and not an "order" as commonly understood but a confederation of autonomous congregations
Saint Benedict's main achievement is his "Rule of Saint Benedict", containing precepts for his monks. It is heavily influenced by the writings of John Cassian, and shows strong affinity with the Rule of the Master. But it also has a unique spirit of balance, moderation and reasonableness (ἐπιείκεια, epieikeia), and this persuaded most religious communities founded throughout the Middle Ages to adopt it. As a result, his Rule became one of the most influential religious rules in Western Christendom. For this reason, Benedict is often called the founder of western monasticism.
In 2007 Mary’s Dowry productions created a new form of film media to present the lives of the saints. Mary’s Dowry Productions recreates stunning silent visuals, informative, devotional narration, and original contemplative music that touches your spirit to draw you into a spiritual encounter with the saint. Watch with your spiritual eye, listen with your spiritual ear. Our films seek to offer a window into the lives of our saints. Using your spiritual senses we invite you to shut out the world, sit prayerfully and peacefully and go on a journey of faith, history and prayer with this inspiring Christian Saint.
Saint Benedict, Benedict film, Benedict DVD available now through Mary's Dowry Productions online shop: