This September 2019 Mary’s Dowry Productions is pleased to release on DVD (and coming shortly to Instant Digital Download) a new film about John Henry Newman that not only looks at his life, conversion and defence of the Catholic Faith during the turbulent times of 19th century England, but his important place in Our Lady’s plan for England as her Dowry. 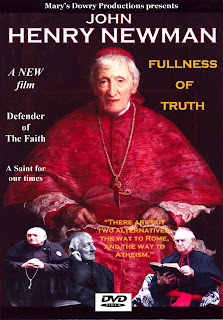 Take a journey through the Catholic history of England as we prepare for the historic re-dedication of England to Our Lady as her Dowry in March 2020. John Henry Newman’s canonisation this October 2019 as a Saint of the Catholic Church comes at a fascinating time in this country’s history. England had been dedicated to the Mother of God as her Dowry, a unique title for a country and with a very special meaning, for almost a thousand years.

Many kings of England formally dedicated the country to Our Lady up until the Protestant Reformation. This NEW film includes presentations from Arundel in West Sussex, which has a unique link with John Henry Newman especially through Henry Duke of Norfolk and the building of Arundel Cathedral which was originally dedicated to Saint Philip Neri (who founded the Oratorians of which Newman was a member) and its rededication as the ‘Cathedral of Our Lady and Saint Philip Howard’ when this Elizabethan Martyr was canonised a Saint.

Walk through the history of England, the lives of many early Saints and English Martyrs, the Reformation and its effect upon the history of the country and the following generations, the exile of the Catholic hierarchy for 300 years until 1850, following which Newman gave his beautiful and historic Sermon 10 known as The Second Spring, and see his important and inspiring role in Our Lady’s plan at a time when young Saint Dominic Savio saw a vision of Pope Pius IV and the torch of the Faith in England.

We also look at Blessed Dominic Barberi of the Mother of God, the Passionist priest who received John Henry Newman into the Catholic Church at Littlemore and who is known as the Apostle of England. With many quotes from John Henry Newman this new film will be a useful and inspiring resource as well as a devotional and spiritual encounter with a new Saint for our times that embodies the continuity of the Catholic Faith with all of its history and beauty.

NEWMAN DVD
Posted by MarysDowryProductions at 19:06 No comments: