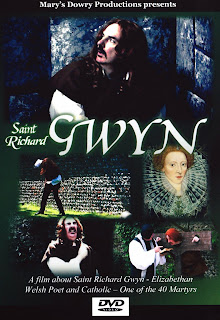 Saint RICHARD GWYN, the first Welsh martyr of Elizabeth I’s reign, was born about 1537 in Lianidloes, Montgomeryshire. He studied for a short time at Oxford, and then went to St. John’s College, Cambridge. Returning to Wales about 1562, he became a schoolmaster and taught in Flintshire and Denbighshire. He married and had six children. Arrested in Wrexham in 1578, he escaped, but he was arrested again in 1580. After being tried and remanded several times at the Assizes, he was finally condemned to death at Wrexham, in October1584, for refusing to recognize the Queen as head of the Catholic Church in England and persuading others to become Catholics.

Two days before his death he was offered his freedom if he would conform to the State religion. As he left the prison on his way to execution, he said to his fellow prisoners: ‘Weep not for me, for I do but pay the rent before the rent day.’ On the scaffold he forgave his executioner, acknowledged Elizabeth I to be the lawful Queen of England and denied that he had ever committed any treason against her; but he still refused to recognize her as head of the Church.

As he prayed, ‘O God, be merciful to me a sinner,’ he was pushed off the ladder and cut down while still alive and disembowelled.  St Richard Gwyn, Catholic layman suffered death for hearing the Mass and for being a Roman Catholic. He died at Wrexham on 15 October 1584.
His life is presented with devotion and history by Mary's Dowry Productions and is
AVAILABLE ON DVD AT:
www.marysdowryproductions.org/shop/
Posted by MarysDowryProductions at 18:10 No comments:

The life of Jesuit priest and English Martyr Edmund Campion presented in a half an hour film.
GOD'S CHAMPION.
Available on DVD through Mary's Dowry Productions:
www.marysdowryproductions.org
﻿
Posted by MarysDowryProductions at 17:58 No comments:

A NEW DVD resource presenting six new short films on the the lives of six Blesseds of the Modern Catholic Church:
Pope John Paul II
Mother Teresa
Alexandrina Maria da Costa
Pier Giorgio Frassati
John Henry Newman
Dominic Barberi
The DVD has a total runtime of 50 minutes and is an excellent way to present to classes or families a factual, devotional and historical biography of these six inspiring people.
Available now on DVD through
www.marysdowryproductions.org/shop/
and
AMAZON
Ships worldwide.
This is a new series launched by Mary's Dowry Productions in October 2012.
For our series 'Well Known Saints' visit our website or online shop or find us on AMAZON.  Presentations of well known Saints of the Church including Teresa of Avila, Catherine, Peter, Paul, Francis of Assisi, Ignatius, and many more.


Posted by MarysDowryProductions at 12:48 No comments: