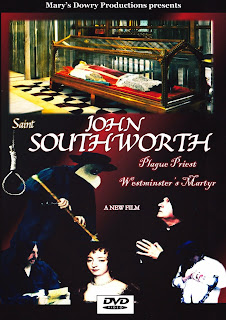 In 2007 Mary's Dowry Productions created a new form of film media in which to present the lives of the Saints on DVD. We invite you to watch our film prayerfully and quietly and to engage your spiritual senses. Watch with your spiritual eye, listen with your spiritual ear.
Mary's Dowry Productions loves to recreate key moments, silently and with no dialogue, from a Saint's life, using historical costume and beautiful backdrops. Original contemplative music runs beneath a detailed narrative that seeks to engage the viewer with the Saint. Our films offer a window into the life of each Saint.
Saint John Southworth worked with Saint Henry Morse during the 1635 plague outbreak in London.
He is known as the priest of Westminster. We look at his whole life in the context of English history and Catholic spirituality.
Saint John Southworth on DVD at our ONLINE SHOP
Posted by MarysDowryProductions at 12:36 No comments: