This morning Mary's Dowry Productions set off to acquire fresh scenery for some new films about the lives of the Saints. We are focusing especially on some early Saints such as Saint Frideswide of Oxford, Saint Hilda of Whitby and Saint Weburga. Looking forward to producing these.

Our destination was Sompting village near Worthing, about ten minutes drive away. We had seen some photos on Instagram of the poppy field and thought we would go and film some scenery first and then, hopefully it will still be lovely and fresh, go and film an early Saint figure in the setting.

Amazingly it began to rain and the wind picked up, which often happens when we set off to film, even in a heatwave! But we persevered and when we finally set up the rain eased off and we were able to spend 40 minutes or so filming the beautiful scenery.

While filming we were able to chat with several locals including a lady who asked if we were just taking photographs. I explained that we were filming for scenery used in our films about historical figures of England, early Saints, Martyrs etc...and after a while of chatting I gave her a business card and she exclaimed that she was a Catholic and interested in the Saints and Catholic history of England. It's great to be able to speak about England's Saints and Martyrs with the people we meet out on location and point them towards our website and YouTube channel so as to share the films with them.

Another amazing thing is that in the 12 years of filming scenery we've never managed to get around to filming a poppy field! So we enjoyed capturing a variety of beautiful footage. The colours are striking.

Imagine the image of an early Saint walking reflectively through the poppy fields as we listen to her story told. We're hoping to go at the end of the week or even next week and start production work on one of our early British Saints in and around the poppy fields in typical Mary's Dowry Productions style.

After a difficult event with our last film, Saint Francis de Sales, which took 15 months to complete, concluding with the music composition computer practically blowing up, we are back up and running with a faster and more reliable music computer to help Bernadette write her beautiful music. I am sure she will get a lot of inspiration from the poppies used in our next film!
Posted by MarysDowryProductions at 14:18 No comments:

Famous for his spiritual classic 'An Introduction to the Devout Life', 17th century Saint Francis de Sales wrote this timeless book especially for people living in the world. He understood that it was every man and woman's calling to walk the road to Heaven here in this life too (be it simply the few first steps, or great leaps along the narrow way) and that you don't have to have a vocation to the priesthood or religious life, to live in enclosure or even follow the monastic routine in order to become a great Saint.

Even back in 17th century Geneva this holy Bishop, who worked tirelessly on the conversion of over 70,000 Calvinists in his region (with success), had the foresight to write books, pamphlets, treatises and letters for men and women living 'in the world'. who were not only interested in the spiritual life but who wanted to know more about the Catholic Faith.

Along with his friend Saint Jane de Chantal, Saint Francis de Sales founded an order of nuns who stepped out of their convent walls every day in search of souls, ministered to the sick, the poor, welcomed laywomen into their monastery on retreat and for peace from the world and even allowed 'old' ladies and sick women to join the order and become nuns too: "What do you want me to do? I like sick people. I'm on their side." Saint Jane de Chantal responded when criticized. 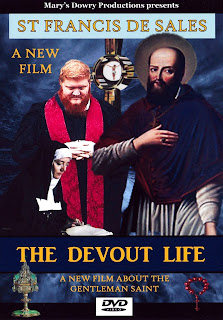 Now available on DVD worldwide, is our NEW film about Saint Francis de Sales, Saint Jane de Chantal and the devout life from Mary's Dowry Productions, posting worldwide in all region formats from our online shop.

With details about the lives of these two great Catholic Saints and excerpts from their writings, books and letters, this is a welcome film for anyone seeking a new or fresh encounter with this giants of the spiritual life. What is the devout life these days? Who was Saint Francis de Sales? What is his relevance today?

Posted by MarysDowryProductions at 11:13 No comments: