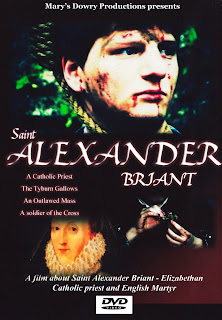 We invite you to take a journey with Saint Alexander Briant - English Martyr.
He was born in Somerset, studied under Fr. Robert Persons, was ordained a Catholic priest and returned to England on the English Mission.  His capture and torture give beautiful insights into the Passion of Christ - he carved a little Cross and wrote a poignant and insightful letter before his execution.

A reverent witness to the Catholic Faith his story is presented in this new documentary.
The film is available now worldwide on DVD (all formats) from
www.marysdowryproductions.org/shop/
﻿
Posted by MarysDowryProductions at 14:30 No comments: