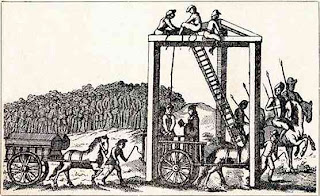 Mary's Dowry Productions remembers Saint Anne Line especially on her feast day as she was hanged at Tyburn on the Tyburn Gallows, also called the Triple Gallows or the Tyburn Tree on 27th February 1601.

Saint Anne Line was a young Elizabethan woman who loved God and those around her. She particularly loved priests, the Mass and prayer. Saint Anne Line lost her husband Roger when he was exiled abroad for his Catholic Faith. She dedicated her life to caring for secret safe houses in England where priests could rest on their missions.
Saint Anne Line also arranged for the outlawed Catholic Mass to be offered during the troubled times in Elizabethan England. She was a woman of deep prayer and kindness and all who knew her were touched by her love of God.


In 2007 Mary’s Dowry productions created a new form of film media to present the lives of the saints. Mary’s Dowry Productions recreates stunning silent visuals, informative, devotional narration, and original contemplative music that touches your spirit to draw you into a spiritual encounter with the saint. Watch with your spiritual eye, listen with your spiritual ear. Our films seek to offer a window into the lives of our saints. Using your spiritual senses we invite you to shut out the world, sit prayerfully and peacefully and go on a journey of faith, history and prayer with this inspiring Elizabethan Saint.
www.marysdowryproductions.org/shop/