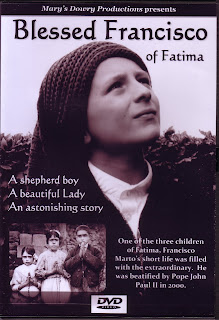 Francisco Marto (June 11, 1908 – April 4, 1919), his sister Jacinta Marto (March 11, 1910 – February 20, 1920), also known as Blessed Francisco Marto and Blessed Jacinta Marto, and their cousin Lúcia Santos (1907–2005) were children from Aljustrel near Fátima, Portugal, who said they witnessed three apparitions of an angel in 1916 and several apparitions of the Blessed Virgin Mary in 1917. Mary was given the title Our Lady of Fátima as a result, and Fátima became a major centre of world Christian pilgrimage.
Mary's Dowry Productions filmed visuals for Blessed Francisco Marto in 2010. These visuals are prayerful and gentle images that run beneath a narration with original music. The story of Blessed Francisco is very inspiring and important.
In 2007 Mary’s Dowry productions created a new form of film media to present the lives of the saints. Mary’s Dowry Productions recreates stunning silent visuals, informative, devotional narration, and original contemplative music that touches your spirit to draw you into a spiritual encounter with the saint. Watch with your spiritual eye, listen with your spiritual ear. Our films seek to offer a window into the lives of our saints. Using your spiritual senses we invite you to shut out the world, sit prayerfully and peacefully and go on a journey of faith, history and prayer with this inspiring Blessed.
Mary's Dowry Productions recreated backdrops from key moments in Blessed Francisco Marto's story, such as the visit of the Angel of Peace, the visits of Our Lady of Fatima, his time in prison, his prayers and penances and his final days.
The film is a prayerful encounter with Blessed Francisco Marto despite being full of information and details from his life.
Blessed Francisco of Fatima is available on DVD through Mary's Dowry Productions:

We ship worldwide, all region formats. As seen on EWTN