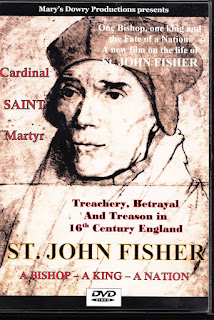 Saint John Fisher, Saint John Fisher DVD, Saint John Fisher Catholic film: A new film on St. John Fisher will be released soon from Mary's Dowry Productions and will be made available on DVD worldwide from Amazon and from our online shop via our website. This new film plays for an hour and has especially produced visuals to run beneath a narrative, giving a simple, detailed and well-paced study and account of the life and mission of this great English Martyr. It also combines historical images and artwork, maps and etchings throughout to give an original feel. The footage that we filmed works very well, presenting key moments of St. John Fisher's whole life, from his years as a young boy and a young man, to his time in the Court of King Henry VII with Lady Margaret Beaufort, his meetings with King Henry VIII, his life at Rochester, the assasination attempts upon his person, the poisoning of his servants and many other interesting aspects. His time in the Tower of London is well covered as is his last journey to the beheading block where he stops along the way and opens his New Testament. His last words and what happened to his head and body conclude the production which gives a good and moving, historical and detailed biography of this great Saint on DVD for all ages. For an original and detailed look at this great Martyr this is a must DVD.
Posted by MarysDowryProductions at 21:53