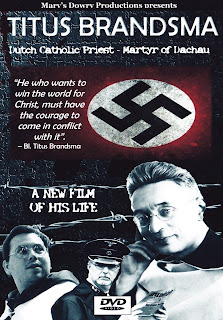 March 2016
New from Mary's Dowry Productions - Blessed Titus Brandsma - a 30 minute film of his life and powerful witness for the Catholic Church during Nazi occupied Holland in WW2.
In this film we take a spiritual and prayerful look at this Carmelite priest who spoke out against the evils of the Nazis and was eventually martyred at Dachau Concentration Camp.
We reflect upon some of his prayers and writings, especially some of those that were penned during his imprisonment.
We also look at the reasons why Blessed Titus Brandsma was arrested and imprisoned by the Nazis and what his message and witness is to us today.
Blessed Titus Brandsma is the Patron Saint of Journalists.
This DVD is now available worldwide in all region formats from:
www.marysdowryproductions.org