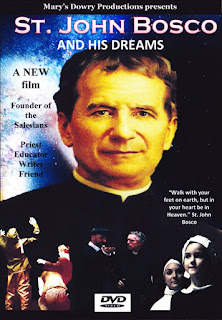 NEW FILM RELEASE
NEW from Mary's Dowry Productions is our 50 minute film exploring the life and dreams of Italian priest, educator, writer and friend, Saint John Bosco, produced in 2017 and now available on DVD worldwide through:
AMAZON UK
and
Mary's Dowry Productions ORG
FILM PRODUCTION INFORMATION
Saint John Bosco is one of 80 original films on the lives of the Saints produced by Mary's Dowry Productions, and is one of our new releases in 2017, the 10th year of the founding of our film production apostolate. Saint John Bosco has a run length of 50 minutes and takes the viewer on an informative, prayerful and very atmospheric journey through the life and dreams of this Italian Saint.
A book called 'The 40 dreams of Saint John Bosco' first came into our hands about 20 years ago. It presents a selection of dream/visions that Saint John Bosco had, beginning as a small boy, as recorded by the Saint in his journals and diaries. The dreams made a great impression upon us and have often been the subject of our conversations. 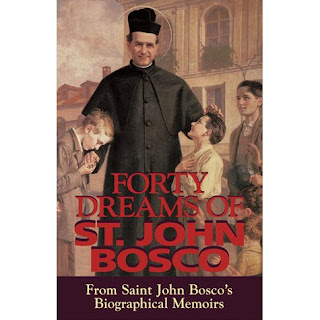 In 2016 we had one of our conference/discussions about Saints and films and thought how amazing it would be to have not only a biographical film about Saint John Bosco's life and missions, but a presentation of some of his dreams. His dreams were given not only as lessons, warnings and instructions for his Oratory boys, but for all Christians, and they are especially relevant today.
Of course, recreating such vivid and descriptive dreams would be a challenge, especially for a film apostolate that functions on the tiniest of budgets. But when we feel that a subject is inspired, we simply go for it. So, at the end of 2016 we booked a couple of filming days in the 'barn' (our 'studio') next to our church and set about planning our film.
VISUALS
Casting was the first step in the production process. We like to have a variety of imagery in our films, sometimes they only show a Saint in an abstract way, distant shots out and about. Other times we call upon our eager and willing team of 'actors' to portray specific Saints and characters associated with them. This requires backdrops and a filming day especially set aside.
For the portrayal of Saint John Bosco we asked a parishioner friend who had portrayed Saint Maximilian Kolbe for us in 2015. For Don Bosco's story we needed a selection of visuals to run beneath our narrative that would include Saint John Bosco's Oratory boys. Among the boys would be Saint Dominic Savio. The boys would feature in the Oratory scenes as well as the dreams we chose to present in our film. As well as boys, we needed a few girls to work with Saint Mary Mazzarello, co-foundress with Saint Don Bosco of the Salesian Sisters. We also needed characters who would feature in Saint Don Bosco's dreams, such as the devil, Death's Messenger, the 'man in the cap' - Don Bosco's guide - and others. We called upon a cast of about 20 parishioners, local Catholic school children, teachers and friends to portray these various people.
The dreams that we chose to portray also include 'To Hell and Back', one of Saint John Bosco's most vivid and sobering dream involving a long journey with his guide into hell. We kept things simple but this turned out to be visually very effective in the end result.
The filming day took place in January 2017 in the 'barn' and its courtyard and garden with simple sets to serve as backdrops. The visuals that we acquired were perfect. It was a difficult day, lots of things go wrong and there is always the sense of oppression whenever we film (always a good sign), but lots of things happen that make us stop and think 'wow that is so guided'. We acquired some wonderful images. The next step saw us finalising narrative, acquiring paintings, photographs and images over the next few months so that in May we were able to work on the editing process.


Finally, at the end of May, despite numerous obstacles (again, always a good sign) the film was complete with effects and credits and ready for the music. Music composition on our films is the most important part because it creates such a specific atmosphere for the film. Our films are prayerful encounters and journeys as well as informative tools. Bernadette wrote a beautiful and powerful score for Saint Don Bosco while Emily finalised the DVD cover. The film was ready for release on June 2nd and is now available in our online shops and through Amazon.


Our film 'Saint John Bosco and his dreams' takes a look at some serious topics such as the tragic consequence of sin and the reality of hell. Some of the imagery in Saint John Bosco's dreams is powerful and shows some of his Oratory boys fleeing the Justice of God into hell. Saint John Bosco's visit to hell, its chambers and viewing platform as well as the inscriptions shown to him by his guide, are also sobering.
We were pleased to be able to present these important messages and images through film and our own experience watching the final DVD left us truly feeling as though we had journeyed with Saint Don Bosco through the places God wished for him to see and share with us.