The DVD is available from
Mary's Dowry Productions.

Saint Padre Pio: Pray, Hope and Don’t Worry:
Saint Padre Pio was called to a specific mission as a priest and friar. From a young age he practiced self-denial and mortification and focused his whole attention upon God. He was able to see his guardian angel and speak with Jesus and Mary. He was called to be a Catholic priest and chose to join the Capuchin order.

After serving for a short time in the Italian army, Saint Padre Pio spent the rest of his life in his monastery of San Giovanni, Italy. For fifty years he bore the wounds of the stigmata. He wrote many spiritual letters, offered the Holy Sacrifice of the Mass was such deep devotion that he brought tears to the eyes of many and moved and converted thousands.

His battles with the devil and his life of sacrifice and prayer, his devotion to souls in Confession, his extraordinary supernatural gifts and his holy soul are an important witness to the realities of sin, grace, Heaven, Hell and Purgatory.

In this new film, Mary’s Dowry Productions presents a new yet timeless encounter with one of the greatest Saints of the Catholic Church, Saint Padre Pio. 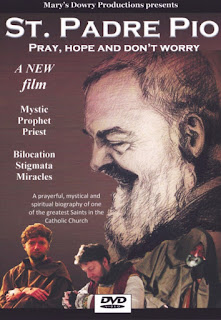 Length and Format; This film runs for 52 minutes and is available worldwide on Region Free DVD.

Note: As with ALL our DVDs you will automatically be sent the correct PAL or NTSC format for your country. You do not need to do anything.