This year Mary's Dowry Productions will be producing several more films about the English and Welsh martyrs, mainly from the group canonized as The Forty Martyrs of England and Wales in 1970 by Pope Saint Paul VI.

Saint Ralph Sherwin was thirty one when he was executed for being a Catholic priest in England, for refusing to acknowledge the Queen of England as the head of the Church, for remaining loyal to the Pope, for celebrating the outlawed Mass and for spreading the Faith throughout England during Penal Times.

This Saturday (7th March 2020) we recreated some specific scenes from the life and mission of Saint Ralph Sherwin so as to make him more accessible and real as an important Saint for England, especially as we draw close to the re-dedication of England to Our Lady as her Dowry at the end of the month of March 2020.

Saint Ralph Sherwin left England after a highly successful career in Exeter College, Oxford (where he met Saint Edmund Campion, the priest he would be executed with in 1581) so as to become a Catholic priest, despite a promising career in the world. He had also met John Paschal in Exeter college, the young man and Ralph's very dear friend who would accompany Saint Ralph and a group of priests and another layman back into England from the English college in Rome.

Saint Ralph was raised a Protestant but converted during his Oxford days. His uncle was a Marian priest loyal to the Catholic Faith. Saint Ralph was deeply devout and very fervent. He heard within his soul the call of Christ to become a priest. He was ordained and immediately yearned to be sent on the English Mission where many priests were heading back into his homeland. It was dangerous territory with the Catholic Faith now outlawed in a country that had been dedicated to Our Lady as her Dowry and had been known as the island of Saints.

In Queen Elizabeth’s England it was illegal to be a Catholic priest. The Mass was outlawed and lighting devotional candles, carrying Agnes Dei’s or rosary beads, sheltering a priest or refusing to attend the state services became punishable by fines, imprisonment, torture and often death.

Saint Ralph and John Paschal were reunited in Rome and chosen to go back to England. In order not to be spotted they were required to dress up as as dashing young secular Frenchmen which annoyed Ralph but greatly amused Paschal. Their names were already on a list of wanted men before they even arrived back in England, but they managed to enter the country and set about visiting Catholics so as to bring the outlawed Sacraments to the persecuted faithful.

After three months eluding the priest hunters, Saint Ralph Sherwin was captured. He was dragged to the infamous Tower of London, questioned, threatened and tortured, promised riches and titles if he denied the Catholic Faith and was soon joined by Paschal who was bold and made fine, brave speeches which Saint Ralph warned him about saying that they would be put to a cruel test.

The two men remained in dire circumstances in the prisons but prayed together and encouraged one another. 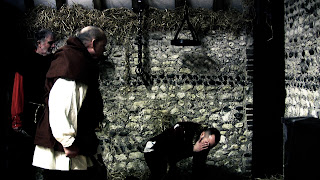 John Paschal was eventually dragged away and tortured. Unfortunately he was unable to bear the pains and threats. He renounced the Catholic Faith and took the Protestant oath much to Saint Ralph Sherwin's dismay.

Years later, Paschal would repent of his apostasy and be reconciled to the Catholic Church. He spent the rest of his life as a much persecuted recusant Catholic. But when Saint Ralph was told the news that John Paschal had apostatized he felt a terrible grief. The Protestants scorned Paschal, calling him weak and the young man was ill received by them once he had relented under their cruel persecutions. Saint Ralph would often say of Paschal, mournfully, "O John, John, little do you know what you shall do before you come to it."


Saint Ralph Sherwin remained firm under the most refined cruelties. He was almost torn apart from the racking, threatened, beaten and relentlessly questioned as the government tried to break the priest's resolution, Faith and spirit.

The priest was placed out in the snow where he almost froze to death in agony, but he remained firm in the Faith and endured the relentless attempts of the Protestant authorities to crush him. His resolution in the Faith earned him much admiration, even from the gaoler who called him a man of God and the best and devoutest priest he ever saw in his life. 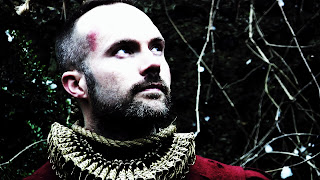 After a sham trial Saint Ralph Sherwin was condemned to death for his priesthood on a trumped up charge of conspiracy which no one believed, least of all Queen Elizabeth herself. He was to die with Saint Edmund Campion and Saint Alexander Briant, two fellow priests, at the triple Tyburn gallows on December 1st 1571.


It was snowing and bitterly cold but great crowds gathered to see the three heroic young Catholic priests die for the outlawed Faith. Saint Edmund Campion was first and after he had been butchered, Saint Ralph kissed the executioner's bloodied hands.

Saint Ralph gave a moving and inspiring speech as he stood beneath the gallows, even though his enemies yelled 'traitor'. He replied "If to be a Catholic only is to be a traitor then I am a traitor!"

We shall be filming additional scenes for our DVD about Saint Ralph Sherwin this month out and about to show this priest's travels and his life on the run.

He is a very important Saint for England especially now as our country is historically re-dedicated to Our Lady once more as her Dowry.

Saint Ralph Sherwin, pray for us!

Mary's Dowry Productions was founded in 2007, named after an ancient title of England in honour of Our Lady, to share the lives of the Saints and Martyrs through film.

For films about the English Martyrs:
www.marysdowryproductions.org