From Mary's Dowry Productions now available on DVD worldwide and Instant Digital Download is a NEW film that looks with devotion and detail at the life and mission of Venerable Sister Elizabeth Prout, a Passionist nun and inspiring Englishwoman. 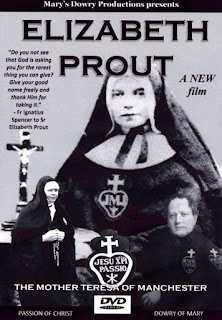 Here is the DVD blurb:

Drawn to Catholicism through the preaching and example of a Passionist priest and missionary to 19th century England, Blessed Dominic Barberi, Elizabeth Prout would come to be known and loved throughout England, and eventually the world, as a daughter of the Passionists, a sister of The Second Spring, a founder of the religious Order of ‘The Sisters of the Cross and Passion’ and a shining light in the infamous slums of Manchester, where England and Ireland’s Catholics heroically persevered in living and practicing the Catholic Faith while enduring the most shocking conditions.

Raised a Protestant in 19th century England, Elizabeth lived near Aston Hall where Fr Dominic Barberi would be called by Our Lady from Italy to England her Dowry, to found the first Passionist foundation and receive Saint John Henry Newman into the Catholic Church. Despite England’s anti-Catholic atmosphere at that time and her parents’ hostility towards the Catholic Church, Elizabeth Prout joyfully entered into the Fullness of the Faith. Guided by the Passionists she was able to respond to the burning love in her heart for Christ in His Passion and in the faces of the poor. She worked with Fr Ignatius Spencer, a fellow convert and son of the Earl Spencer, (also a relative of Princess Diana), to found her order of nuns and live a life of inspiring service and deep spiritual insight.

In this NEW film we look at the life of Venerable Sr Elizabeth Prout, a Saint for our times. Length and Format: Elizabeth Prout is 45 minutes in length and is available worldwide on Region Free DVD. As with all our DVDs you will automatically be sent PAL or NTSC format depending on your country.

Here are the links: