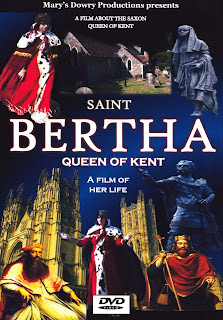 Our film about St. Bertha: Queen of Kent is now available on DVD worldwide from:
MARY'S DOWRY PRODUCTIONS ONLINE SHOP

Mary's Dowry Productions loves to recreate key moments, silently and with no dialogue, from a Saint's life, using historical costume and beautiful backdrops. Original contemplative music runs beneath a detailed narrative that seeks to engage the viewer with the Saint. Our films offer a window into the life of each Saint.
In this film we look at the life of Saint Bertha, a Frankish Princess born into the Merovingian Dynasty, given in marriage to the Pagan King Ethelbert of Kent so as to forge political ties under the condition that Saint Bertha would be able to continue practising the Catholic Faith.
We look at Pope St. Gregory the Great's Gregorian Mission to England, how St Bertha's example assisted in King Ethelbert's conversion to Catholicism and the founding of Canterbury Cathedral, the Mother Church in England until the schism of the 16th Century known as the Protestant Reformation.  The last Archbishop of Canterbury Cathedral was Reginald Pole, son of Blessed Margaret Pole the Countess of Salisbury and English Martyr.
We look at how the Mother Church in England was finally re-established with the opening of Westminster Cathedral in London.  We also look at the Roman Occupation of Britain, Pope St. Gregory's letter to St Bertha thanking her for her holiness and witness to the Catholic Faith and praising her faith and knowledge of letters and other interesting facts from history.
A careful blend of footage of England, historical imagery and photographs, paintings, works of art, stained glass windows, a simple costumed portrayal of St. Bertha, statues, sculptures, maps, narrative and music make this a creative way to meet St. Bertha and learn about her wonderful example of Catholic Faith and devotion and her important place in the history of the Catholic Church in England.
St. Bertha: Queen of Kent is available now on DVD worldwide.
www.marysdowryproductions.org
We ship worldwide and region free