St. Mildred of Thanet, film of her life, new DVD 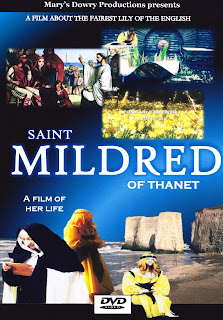 In 2007 Mary's Dowry Productions created a new form of film media in which to present the lives of the Saints on DVD. We invite you to watch our film prayerfully and quietly and to engage your spiritual senses. Watch with your spiritual eye, listen with your spiritual ear.
Mary's Dowry Productions loves to recreate key moments, silently and with no dialogue, from a Saint's life, using historical costume and beautiful backdrops. Original contemplative music runs beneath a detailed narrative that seeks to engage the viewer with the Saint. Our films offer a window into the life of each Saint.
In this film we follow the gentle, devout and faithful Saint Mildred from her home in England to France and a conflict with a worldly abbess determined to align herself with this royal English family.
Miracles followed St. Mildred who escaped from France, returned to England and became a famous abbess, later a Saint whose popularity once outshone that of the great Saint Augustine of Canterbury in England among the English people.
Immerse yourself in beautiful works of art, footage of nature, the drama, faith and devotions of an early English Saint with historical imagery, narrative and music in this 30 minute film of her life available worldwide on DVD from Mary's Dowry Productions:
www.marysdowryproductions.org
Posted by MarysDowryProductions at 15:05