FIRSTFRUITS
Saint Cuthbert Mayne – November 30th
At the Launceston assizes, Saint Cuthbert Mayne was indicted for treason under various heads, including importing and publishing a papal document and celebrating Mass. The evidence was very insufficient, and one of the judges had qualms about it. So the case was re-considered in London, but the Privy Council directed that the verdict of guilty should stand. On the day before that set for his execution, Saint Cuthbert Mayne was offered his life if he would renounce his religion, or at least swear that the queen was the supreme head of the Church in England: he refused peremptorily, confirming his refusal by a sign of the cross and a kiss upon the Bible. The next moning, 20th November 1577, he was dragged on a sledge to Launceston market-place, where he was not allowed to address the people. At the last moment he was invited to implicate Mr Tregian and Sir John Arundell (there were those who had their eye on these gentlemen’s estates); Mayne replied, “I know nothing of them except that they are good and godly men; and of the things laid to my charge, no one but myself knows anything”.
A year later, Saint Edmund Campion wrote to Gregory Martin: “We all thank you for your account of Cuthbert’s martyrdom; it gave many of us real religious joy. Wretch that I am, how that novice has outdistanced me. May he be favourable to his old friend and tutor!”
“These were purchased from among men, the first-fruits to God and to the Lamb.” – Apoc. 14, 4.
Reading for 30th November
Mementoes of the Martyrs and Confessors of England and Wales by Henry Sebastian Bowden of the Oratory.
For films about the Saints and English Martyrs:
www.marysdowryproduction.org 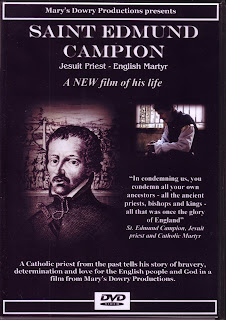